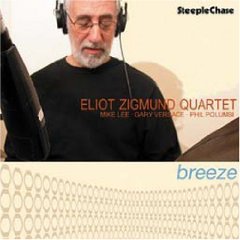 Recently I've been listening to Breeze, drummer Eliot Zigmund's 2008 release on the SteepleChase label. In part my interest in the recording stems from catching a couple of Zigmund's sideman gigs at The Turning Point Café in Piermont, NY. On those occasions I couldn't get a handle on all of the things that felt right about his playing. And describing some of the highlights in a live performance review didn't come close to capturing the essence of his style.

The elements that initially intrigued me about Zigumnd's drumming came into clearer focus on three of the record's nine tracks, "School Night," "Homeland" and "Mathew, In Three." Zigmund is a refreshing change from the ever-growing number of trapsters who rule with an iron fist. There's a shadowy, indirect side to his playing that makes for an interesting contrast to his more assertive, straightforward traits. He functions very well at low dynamic levels, utilizes a minimum of strokes, avoids clutter, and often implies rather than explicitly states the beat.

Zigumud's style encompasses grace and grit—you often hear both qualities in the course of just a few bars. He excels at listening, responding to and complementing tenor and soprano saxophonist Mike Lee, pianist Gary Versace and bassist Phil Palombi. Aside from playing a supportive role his drumming makes sense on its own terms. When Zigmund is at his best, you rarely notice his technique and execution. Instead, you feel his effect on the music and realize that he projects a distinct personality in ways that don't necessarily draw a lot of attention.

The head of Mike Lee's composition, "School Night," the disc's opening track, is a prime example of Zigmund's resourcefulness. Utilizing every component of the drum set, he steps up and takes his place alongside Lee's tenor, yet never sounds particularly busy. Throughout the course of the swinging, thirty-two bar tune, Zigmund delineates time, plays substantial portions of the melody by way of accents on the snare, toms, bass drum and cymbal, and offers a number of stimulating comments. On the bridge his repetitive two and three stroke fills to the snare and tom-toms blithely bounce away from the melody and create a shuffle-like feel.

Zigmund's comping during Lee's solo actively shapes the music. Snare accents—some nimble, others chomping—interact with and work their way around Lee's somewhat deliberate lines. In the instances when the saxophonist becomes verbose, the drummer's commentary all but disappears. Working at a dynamic level below Palombi's bass line, in the early stages of Versace's improvisation Zigmund's snare tap dances and his cymbal sizzles. He then handles the pianist's brief upheavals in different ways. During one of Versace's adamant passages the drummer offers firm snare strokes in near unison and tops them off with a brief, scrambled fill. Another eruption elicits light, carefully placed snare accents followed by the broad hiss of the cymbal and stout hits to the snare and bass drums.

During Versace's slow, dream-like introduction to his composition "Homeland," Zigmund deftly executes neat pecks to the cymbals, brief buzz rolls, and single strokes to the snare. All are played at a very low volume. He's not just accompanying the pianist; there's an element of independence which makes the music a little larger and a little more certain. Offering only a hint of a steady pulse, his drumming is neither random nor schematic. It's all the more effective for what's left unsaid. Any more strokes would be too busy; any less would run the risk of sounding disjointed or haphazard.

At times during Lee's solo on his "Mathew, In Three," Zigmund is a model of restraint, gently patting the cymbal and adding the occasional well-placed accent. Often several bars go by in which he barely makes a ripple. In other instances Zigmund transforms the lovely waltz into something a lot more vigorous. Rim shots sound like a nail gun; the kick drum resembles a boot stomping on a wood floor. There's more than one fill in which impudent strokes are jammed into tight spaces. During these periods, the insistent, somewhat stiff quality of his drumming always swings.