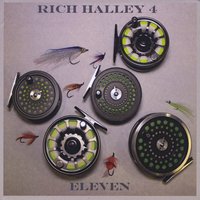 Rich Halley and Michael Vlatkovich have been on a real hot streak as of late. Halley, who also runs the Pine Eagle record label, continues to maintain a number a groups. Besides the quartet featured on Eleven, he has a new quartet with the excellent LA-based trumpeter Dan Clucas, and continues to work with the legendary Bobby Bradford. Halley also leads the Outside Music Ensemble, a large group which performs creative music exclusively in outdoor settings. Vlatkovich, also a member of Halley's Outside Music Ensemble, tends to issue albums in pairs. 2015 has seen the release of two of the trombonist's most creative, risky and enjoyable recordings; a septet, Ask 7 (pfMENTUM, 2015) and an elaborate multi-overdubbed "large ensemble" recording Mortality (pfMENTUM, 2015).

Eleven captures this most vital group at the height of their powers. Halley has a big, fat, "bull tenor" saxophone sound which, in tandem with Vlatkovich's alternately blasting and purring trombone, comprises one of the most formidable front lines in modern jazz today. Halley's compositions are a substantial lot that will please fans of Steve Lacy, Charles Mingus, and Sun Ra. Though rooted in blues and hard bop, Halley's pieces are relentlessly forward-looking. Nearly all feature unusual, asymmetrical structures rendered barely noticeable by the quartet's graceful execution. Tempos and time feels vary from the balladic ("Slider," "The Creep of Time") to the funky ("Convolution," and the latter 2/3rds of the Reification Suite: "Radioactive" and "Remnant") to hard-charging post-bop ("Adjusting the Throughput," "Glimpses Through the Fog"). "The Animas" has a sort of calypso-like feel that hearkens back to Halley's work with the Lizard Brothers, a band he led throughout the 1980s and 1990s. Carson Halley's assured, steady drumming locks in with Clyde Reed's fluid bass throughout.

Though Halley's composing is as strong and piquant as ever, the quartet's raison d'etre continues to be the process of improvisation. There are a number of parallels between Eleven and their previous album, the completely improvised Creating Structure (Pine Eagle Records, 2015). The pieces on Eleven, as substantial as they are, act as a framework. Yet, as Halley stresses in his liner notes, they do not dictate the content of the ensuing improvisations. A close listen reveals that there's often no distinct breaking point between the composed and the spontaneous. One gets the sense that some of these pieces could literally go anywhere. "Dead of Winter" is a case in point. The band traverses a number of rhythmic and harmonic zones, reaching a summit via Reed's knotty, resonant bass solo only to revisit the somber, canon-like opening theme. The multi-sectioned "Slider" (possibly a wry dedication to both Reed and trombonist Vlatkovich) is even more opaque. The one constant is that all of it swings with conviction and visceral élan.