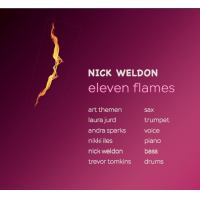 Nick Weldon is best known as a pianist and in that context has accompanied some of the biggest names in jazz including Sonny Stitt, Johnny Griffin and Jimmy Witherspoon. However on this album he plays bass. He's had classical training on the instrument and in addition to jazz dates, he continues to play in orchestras. But Weldon is clearly much more than merely competent as a jazz bassist. His dexterous playing shines through the whole of this album—a prime example: his warm, resonant intro to "Where Are You." His sextet is populated by some of the most familiar names on the British jazz scene. Saxophonist Art Themen and drummer Trevor Tomkins are two beloved veterans of UK jazz and both were members of Michael Garrick's groups. Themen was also a long-time member of Stan Tracey's various outfits and Tomkins was a member of the highly esteemed Rendell Carr Quintet.

Pianist Nikki Iles has been a stalwart of British jazz for over three decades and has collaborated with the likes of Kenny Wheeler, Mike Gibbs, Norma Winstone and Stan Sulzmann. Trumpeter Laura Jurd is a relative newcomer but has already released several albums including two highly acclaimed CDs by her group Dinosaur. Finally, vocalist Andra Sparks lost her voice at the first recording sessions of this album in 2015 but fortuitously, gradually regained it in time for the album to meet its mixing and mastering schedule in 2017.

Sparks comprehensively dominates the album with her sultry voice. Take for example "Weaver Of Dreams" made famous by Nat King Cole. In addition to standards, Weldon includes a couple of his own compositions. There's the plaintive ballad "One Kiss" and then there are the painfully poignant lyrics to "Bulimia." There are also a couple of oddities too. "Justice" is a contrafact of the 1929 song "Just You, Just Me" which Thelonius Monk adapted with the name "Just Us." He subsequently renamed it "We Named It Justice," and finally it became "Evidence." Opening and closing with a breathy recitative, this is actually a melange of "Evidence," "Just You, Just Me" and Weldon's own "Drums And Whispers."

"I Feed A Flame Within" is Weldon's jazz adaptation of Madeleine Dring's contemporary setting of John Dryden's seventeenth century poem. It's a true outlier but nonetheless entirely gripping. The track is also an allusion to the album's title which in his sleeve notes, Weldon explains thus: "I love the feeling inside the sound as a musician reaches for resonance, for it is a feeling filled with the deepest vibrations of being. A flame, one could say, that burns with passion, and whose light yet resembles truth." Thus we have here eleven flames and they all are burning brightly.

Where You Are; Baby, Don’t You Quit Now; Weaver Of Dreams; Justice Song; One Kiss; It’s Crazy; How I Wish/Ask Me Now; Bulimia; I Feed A Flame Within; Georgia; Hushabye Mountain.