Royce Campbell: Elegy to a Friend 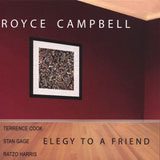 A versatile guitarist, Royce Campbell is equally at home with straight-ahead jazz and pure blues. When he got this group of Indianapolis jazz artists together in September 1990, it was to explore a different region altogether: jazz's modern mainstream. This allowed the quartet to explore, through original compositions, the more creative aspects of their music. Each musician stretches out considerably, and when they come together, it's with imaginative musical statements. Everybody solos prolifically.

The drummer for this session, Stan Gage, passed away two years after the recording was made but before its initial release; hence the decision to honor his memory with the title. Like the others, he remains fired up during this spirited session.

Don't be fooled by the term Elegy in the album's title. This was recorded when Gage was alive with the passion of modern music. As is the custom with most jazz elegies, this album remains hot and lively; filled with the energy that brought them together in the first place.

Campbell's Trane Track provides a stellar example of the forward leap that this unit had decided to take when they came together for this session. Saxophonist Terrence Cook, on soprano, delivers a fiery sermon that pays homage to the later period of John Coltrane. He's followed by a lengthy and creative bass spotlight in which Ratzo Harris launches spontaneous double stops and spit-fire tremolos.

Campbell, meanwhile, moves his guitar gracefully through the entire session, providing the glue. His fluid approach has always been reliable. With this unit, he's willing to let the others have plenty of freedom, but he's always there to unite them.

Gratis, acting precisely on what its title connotes, launches the quartet into a free jazz spirit. Ultra-high harmonics from the double bass, sweeping bow movements that loom eerily, free-form guitar clusters, spontaneous bombs from the drummer, and an array of alto saxophone thrills intended to alarm, provide a fascinating adventure. Yet, the presentation is highly accessible.

Most of the album takes on a milder hue, concentrating on the mainstream and merely seasoning the pot with avant-garde leanings. Drummer Gage can be remembered for his contributions through all the different topics showing up here, as well as for his dynamic solo on the album's opening number. They close with "Elegy to a Friend, which does, indeed, practice the worldwide custom of elegy through its classical definition. Oboe, bass, guitar and muffled cymbals close it on a somber note that moves slowly over a beautiful refrain.