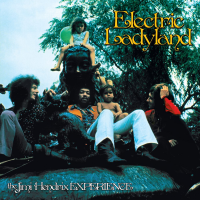 Given the voluminous prior excavations of Jimi Hendrix' vault, the producers of and contributors to The Jimi Hendrix Experience's Electric Ladyland 50th Anniversary Deluxe Edition deserve some kudos. This 3-CD plus Blu-ray set compares favorably to similarly-conceived archive presentations released coincidental to it, specifically More Blood, More Tracks (Legacy Music, 2018), Vol. 14 of The Bootleg Series of Bob Dylan and the 50th Anniversary editions of The Beatles (Apple, 1968) a/k/a 'The White Album.'

Yet even as this three-CD plus Blu-ray set goes significantly further in delineating the creative evolution of the late rock icon, an inexorable process only fitfully outlined by the litany of prior posthumous reissues, the package does resemble the checkered likes of those titles: it is a mixed blessing of sorts (and not just for the naysayers who so vehemently criticize the Experience Hendrix team of the late guitarist's sister Janie, long-time engineer Eddie Kramer and biographer/archivist John McDermott).

For one thing, it's got to be somewhat disappointing, to certain music lovers, collectors and fans, that there is no condensed configuration corresponding to the larger set (with or without a DVD). That said, pragmatically speaking, there would be no reasonable means to scale down this package without sacrificing one essential component or another. In addition to overseeing the 5.1 Surround mix, Kramer might well have also supervised the remastering of the original album: his 2010 collaboration with George Marino resulted in sound more full and deep, though not quite so bright and tactile in its presence, as Bernie Grundman's new work on the original tapes as enclosed here.

Apparently there wasn't much to be done at all to improve the audio of this previously-unreleased concert recording Live At The Hollywood Bowl 9/14/68. Even so, the thin sound quality and amateurish segues still can't really muffle the impact of the Hendrix Experience's courageous drive to venture beyond the boundaries of their standard repertoire (as preferred by both the group's audience and its management); while the trio cull only "Voodoo Child (Slight Return)" from the (then) forthcoming album, on this ten-minute rendition of "Are You Experienced" they reinvent the original, and sound liberated (and liberating) during nearly twelve minutes of the slow blues "Red House." And then, after all the affable repartee with an increasingly disruptive audience, plus quick run-throughs of "Foxey Lady" and "Fire," there's an instrumental take on Cream's "Sunshine of Your Love" that sets the stage for the coup de grace of "I Don't Live Today" and "Little Wing," That alternately explosive and tender combination effectively renders "Star Spangled Banner" and "Purple Haze" an encore, the guitarist's socially-conscious intro here hearkening back to the outset of the show and his dedication of dissonance to the Black Panthers

Unlike this surreptitious recording, the audio fidelity improves over the course of near eighty minutes of The Early Takes, studio culls as well as demos Hendrix recorded on reel-to-reel in his New York hotel in 1968. While a pair of these cuts, "Cherokee Mist" and "Angel," in different form, also appeared on Both Sides of the Sky (Legacy, 2018), it is fascinating elsewhere to hear Jimi muse out loud as he composes, at one point making mention of a 'roomful of mirrors." It's more important, however, to discern that rock-solid musicianship the underpinning of the extended "1983...A Merman I Should Turn to Be"-different versions of which bookend these twenty tracks on the CD-and that the otherworldly aura radiating from it in completed form proceeds from the author's melody and words, not the other way around.

Fortunately, the addition of forty extra minutes to At Last ... The Beginning: The Making of Electric Ladyland, does not obscure its most salient point(s). The video documentary preserves such minutiae as that revolving around the alt"ernate album cover designs: contrary to Hendrix' specific request, both domestic and British record labels dispensed with the Linda (Eastman) McCartney's shot restored to prominence here. Originally produced as part of the Classic Albums series, this series of interview snippets features recollections of various collaborators, including a Noel Redding as bitter as Mitch Mitchell is affectionate, but importantly emphasizes how Jimi Hendrix 'produced and directed' this project while regularly distracted by an inefficiently administered touring schedule.

It's a critical factor also referenced in a plethora of handwritten notes of the rock icon's. juxtaposed with an array of essays and photos, that populate the forty-eight page booklet, a conflict rendering even more laudable the ambitious conception and protracted execution of Electric Ladyland, This 50th Anniversary Deluxe Edition thus reaffirms the album, comprised of the sixteen cuts as originally released a half-decade ago, as simultaneously a tribute to Hendrix' powers of concentration and a symbol of artistic freedom (which included early work with horns as pictured here).

In his usual astute fashion, David Fricke notes in his anecdotal summary that the r&b-infused likes of "Gypsy Eyes" and "Burning of the Midnight Lamp," personalize these original songs of Hendrix,' but no more deeply than the fifteen minutes of slow blues that is "Voodoo Chile" or its shuffling corollaries "Rainy Day, Dream Away" and "Still Raining, Still Dreaming" as they precede the apocalyptic overtones of this monumental interpretation of Bob Dylan's "All Along the Watchtower."

As with of The Beatles Super Deluxe Edition (Apple, 2018), it's hard not to contemplate a single album configuration of cuts, but in the end, it's impossible to question the innovative creative logic of this magnificent dream sequence in song.