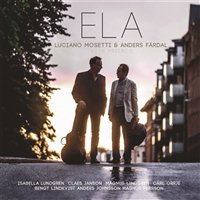 Music that is as light and airy as a midsummer night on Södermalm, Stockholm's south island. The feeling is summed up in Mikael Silkeberg's superb cover photo in which Luciano Mosetti and Anders Färdal are pictured stopping for a chat in the early hours on their way home from a gig. The sky behind them, which has never truly darkened, glows with the coming of the dawn.

Mosetti, who plays trumpet and harmonica, is from Italy but came to Sweden on tour in the mid-sixties and never went home. He works primarily as a studio musician and started playing regularly with Färdal, a local guitarist, 20 years ago. Amazingly, this is their first record.

Only Björn Wigardt's "Södermalm," a local classic sung here by Claes Jansson, has anything specific to say about the place. The other numbers, with the exception of "Waltz For Malin," an original composition by Färdal, are jazz standards or by the late, great Brazilian guitarist/composer Tom Jobim.

The album opens with just Färdal and Mosetti reworking Gershwin's "Summertime" and setting the cool Nordic summer tone for the rest of the program. They are joined by Carl Orrje (piano), Anders Johnsson (bass)and Magnus Persson (percussion) for Jobim's "Ela é Carioca— She Is A Carioca." (Before it took on musical connotations, Carioca was the name for an inhabitant of Rio de Janeiro.)

Isabella Lundgren provides excellent Billie Holiday- inspired vocals on "You've Changed" and "What Are You Doing For The Rest Of Your Life?" She learned music in New York, working there with Charles Tolliver and Eddy Davis but is now studying for the priesthood. God's gain is a sad loss for jazz.

The two principals are at their best on "Lover Man" and Duke Ellington's "Do Nothin' Till You Hear From Me." On the latter Mosetti plays trumpet and Färdal contributes a superlative, laidback solo, one of the best on the album.

In an age when so much jazz has become self conscious and often pretentious "art" music, this album is a breath of fresh air— drifting off the Baltic then gently breezing through the streets of Södermalm.

Summertime; Ela é Carioca; You’ve Changed; Lover Man; Södermalm; A Time For Love; It Might As Well Be Spring; What Are You Doing For The Rest Of Your Life?; Do Nothin’ Till You Hear From Me; Chega De Saudade; Waltz For Malin; How Long Has This Been Going On?; Corcovado.