By NENAD GEORGIEVSKI
December 2, 2011
Sign in to view read count 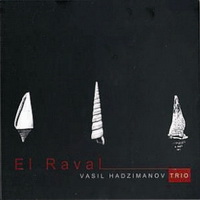 El Raval is an ambitious project that brings together three virtuosos: renowned keyboardist/pianist Vasil Hadzimanov Trio; bassist Martin Gjakonovski; and drummer Alek Sekulovski. Each artist is a prominent figure in his own musical sphere and country, but with this recording the Vasil Hadzimanov Trio arrives as a unified band. What links these remarkable musicians together is guitarist Toni Kitanovski, who assumed the role of producer and contributed three tracks to the date. Each of them has played with Kitanovski's regular band (Sekulovski is a regular member of the guitarist's trio) or on different projects, and Kitanovski states in the liner notes, this is the dream team he has long envisioned to assemble.

The title refers to a neighborhood in the Ciutat Vella district of Barcelona, where Hadžimanov had the opportunity to immerse himself in the local music scene and play with musicians at a local jazz club. "El Raval" is soulful and romantic, and the rhythm section provides the perfect vehicle for Hadžimanov to underscore and embellish every note of the melody. In addition to the four original compositions and arrangements the trio has contributed to El Raval (including the producer), there are inspired interpretations of works by drummer Jack DeJohnette saxophonists Ornette Coleman and Wayne Shorter, composer Antonio Carlos Jobim and Macedonian composer—and father of this trio's bassist—the late Dragan Gjakonovski-Shpato, a legend in his own lifetime.

The trio is driven by its own deep pulse and provides tension and release to make this modern jazz swing. The opener, "Ahmed the Terrible," is a prime example of the trio's tight but loose playing typical, its improvisations proving to be especially compelling as the trio exhibits great technical ability while simultaneously retaining lyrical eloquence.

The record really showcases Hadžimanov's prowess on (for him rarely used) acoustic piano, his playing at once dynamic and sensitive, bold and impassioned. As front man for the popular Vasil Hadžimanov Band—a classic electric fusion group—his music and playing is expressed through a myriad of keyboards, typically a showcase for technical virtuosity that remains in the shadow of bands such as Weather Report. As much as he is lauded as the Balkan's Joe Zawinul, it is clear that keyboards have obscured rather than bolstered his own original voice. On the other hand, it could be said that Vasil Hadžimanov Band's dynamics have influenced those expressed here on acoustic piano, as the pianist demonstrates an unusual ability to infuse bold statements with expressive nuances. Elsewhere, "Bez Povratok" is a solo bass improv rendition of a composition composed by Gjakonovski's father.

The close communication during these performances is quite impressive, making El Raval both a great musical statement and a meeting of spirits. For the members of this trio, this is just the latest stop on an engaging musical odyssey; hopefully there will be another encounter.