By WOODROW WILKINS
December 17, 2008
Sign in to view read count 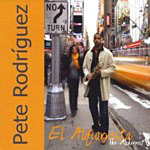 "Jive State Suite" sure is an attention getter. The introduction to the first track of Pete Rodriguez's El Alquimista (The Alchemist) makes clear this is an album with a difference.

Rodriguez, a trumpeter, vocalist and composer, has performed with a virtual who's who of Latin music, as well as other styles. Among his many associates are Celia Cruz, Tito Puente, Eddie Palmieri and Chico O'Farrill.

"Jive State Suite" is a set of five songs inspired by Rodriguez's dealings with academia. Drummer Henry Cole starts things off with a workout on the toms, followed by a startling piano chord from Luis Perdomo, and Ricardo Rodriguez's bass line. David Sanchez's tenor saxophone starts the dramatic melody, joined by the trumpet. The song shifts gears when Perdomo leads into a straight-ahead jazz approach, then back to the brooding mood set by the intro. What follows is a free-form journey, with trumpet and saxophone engaging in dialogue, often overlapping each other.

The mellow "My Patience" ends the suite with Perdomo making his first appearance on Fender Rhodes. Trumpet and tenor sax share the melody, with Rodriguez exploring the lower range of his instrument during his solo, followed by Sanchez. Perdomo then scores with a sound that brings to mind Tom Schuman or Earth, Wind & Fire's Larry Dunn.

After Roberto Quintero goes solo on the congas with "Por Si las Moscas, Roberto," the full band comes back on "Scorpion," inspired by an actual Texas scorpion attack on Rodriguez. It's a high-energy piece in which the trumpet and tenor playing several rapid-fire riffs. While the congas, bass and drums keep up a high pace in the background, Sanchez slows down the lead during his solo—for a moment. When he accelerates, the piano becomes more active, and the others play with more fervor. Rodriguez follows suit, starting off subtly before jumping into high gear.

The title song begins with Quintero's congas, followed by bass, drums and piano entering to set up another rapid-fire trumpet and tenor duet. The two instruments sound as one, with a blend that occasionally sounds as if a trombone is in the mix. A series of solos by tenor, piano and trumpet follows, ending abruptly with the piano.

By definition, an alchemist is one who practices the ancient art of converting base metals into gold or, symbolically, one who changes a common item into something precious. Rodriguez turns common notes into a special mix of Latin, jazz and even symphonic music.