By GLENN ASTARITA
August 11, 2017
Sign in to view read count 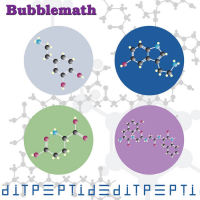 Edit Peptide is the follow-up to Minnesota-based Bubllemath's Such Fine Particles Of The Universe (Sounds Reasonable, 2002); hence, a 15-year gap purportedly due to the customary anomalies and distractions of life. But the musicians have come back with a raging vengeance via this excitable album, underscored by the prevailing math-rock component, leading to high-impact works tinted with humor and madcap diversions. At times, the group revives the spirit of Frank Zappa amidst these cross-genre enactments, spanning classic prog rock, post-punk...or, perhaps, post-anything. Solidified with an electrifying presence and gobs of nerve-splitting dynamics, these intricately arranged compositions must have demanded quite a bit of preparation and focus.

Breaking down the knotty time signatures and multidimensional frameworks may be akin to unscrambling and solving the Rubik's Cube puzzle. While many albums that build upon fast-moving and byzantine song forms can appear superfluous or showy, this band integrates substantive storylines, technical marksmanship and cohesive movements built upon numerous contrasts and strong melodies. Moreover, the program unveils an abundance of hidden treasures during additional spins.

Routine Maintenance; Avoid That Eye Candy; Perpetual Notion; A Void That I Can Depart To; Get a Lawn; Making Light of Traffic; Destiny Repeats Itself; The Sensual Con.