By DOUG COLLETTE
March 4, 2018
Sign in to view read count 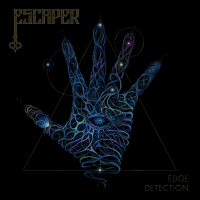 Its name cryptic but provocative, Escaper embarks on something of a fantastic journey with its sophomore album, Edge Detection. As the quintet moves from the earthy realms of the material world into far-flung reaches of space(s), it legitimately seeks to inspire and to a great degree achieves that ambition.

Nine nimble renderings of Escaper's all original material come to fruition here on a recording well-engineered and co-produced by John Davis. A previous collaborator with the disparate likes of Lettuce, Brad Mehldau and the Black Keys, the man who engineered and mixed this project places some daring markers in rarefied air to which the musicians duly rise, as on "Secret Weapon. " Here the insistent rhythms intertwining with guitar and keyboard textures explore an interstellar soundscape introduced early on.

The sound of Johnny Butler's saxophone is crucial to keeping Escaper from disappearing into a progressive fog. In fact, as he leads his bandmates via the circuitous route of his horn on delay/repeat during "Rare Form," a performance that lives up to the track's title. Keyboardist Adam Ahuja is equally prominent in the sound of this five-piece group, and while he may not exactly expand upon the synthesizer approach perfected (sic) by the Mahavishnu Orchestra's Jan Hammer during the heyday of jazz-rock fusion, he nevertheless refuses to allow himself the self-indulgence of turning his his instrumental sounds to mere gimmickry.

His laudable restraint is altogether apparent on this atmospheric title song. In a most understated fashion, Ahuja and guitarist Will Hanza demonstrate how they act as effective foils for each other, even as bassist Jay Giacomazzo and drummer Andrew Nesbitt function in a similarly complementary style. And whether prompting dancing or the alternative, contemplation, often as not Butler's horn lines tickle the ear on the way into the mind.

Edge Detection is nothing if not a dynamic piece of work, so it's only logical to follow the ethereal likes of that cut with "Green Hill Zone." Crunching funk-inflected guitar and squawking sax illustrate careful track sequencing that erects a tangible ebb and flow. Escaper's intuitive internal connections are fluid and full of finesse, too, so while the appropriately titled "Hands Up" is even more of a sonic onslaught, the quintet tempers the tone of the album through the streamlined attack of the following number, "Realms." Acting with such restraint, the group does not flaunt its technical expertise, considerable though it may be.

Following in quick succession, "The Mountain" isn't the first track here to suggest what a pleasure it would be to see this band perform this material live, it's just the most obvious one. And it doesn't disparage this selection or Edge Detection as a whole to say these recordings are a firm foundation for presentation on the stage; perhaps the next step in Escaper's evolution should be a concert release, but this one will surely suffice in the meantime. By the time "Dream Times" and the comparably spacious "Galaxies" conclude, there's every reason to believe this unified collection, while not exactly innovative, will prove to be as durable as it suggests on initial hearing(s).