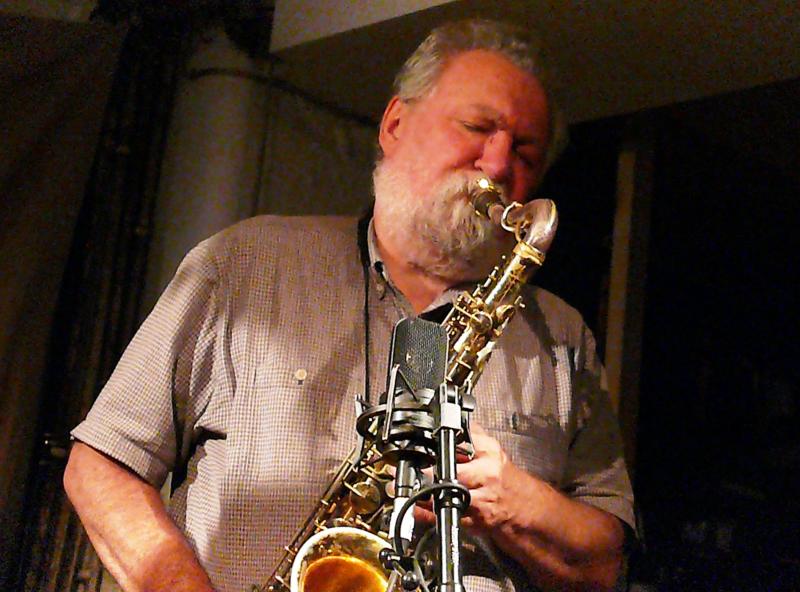 "There won't be any tunes." That was the response to the inquiry from a passing tourist as to what to they might expect. A fairly accurate answer you might think given the line up of saxophonist Evan Parker, drummer Eddie Prevost and bassist John Edwards. But what was anticipated in the place of hummable ditties was clearly proving a draw as a long queue stretched back from the door into north London's Cafe Oto. Given that Parker appears at least once a month in the capital, courtesy of his regular gig at the Vortex just up the road, the line was testament to the drawing power of this particular aggregation.

In fact it was Prevost's gig, a launch party for a new triple CD set 3 Nights at Cafe Oto (Matchless, 2015) documenting the drummer's residency in May 2013 in the same venue, showcasing the same trio, along with special guests Alexander von Schlippenbach and trombonist Christoph Thewes. While Prevost's reputation might lie primarily in his tenure with longstanding improv outfit AMM, he also brings those sensibilities to free jazz settings too. Indeed he has waxed a series of discs under the moniker Meetings with Remarkable Saxophonists, its title echoing spiritual teacher G. I. Gurdjieff's famous text, whose inaugural volume features Parker and Edwards (Matchless, 2012).

Perhaps a more exact headline for this evening's event might have been A Meeting of Three Remarkable Instrumentalists, uniting as it did three masters of dynamic ebb and flow, any of whom were capable of redirecting the trio's energies through their modulation of speed, timbre or density. While perfectly tuned to one another's bearing, they simultaneously invented their own, using whatever tools seemed most suited to the moment. Over the two continuous sets, they explored every permutation available within the triumvirate, with nothing done by rote.

At 73-years old Prevost cut a dapper figure, thin and wiry with a neatly trimmed silvery beard. That precision also extended to his playing. He sculpted fiercely insistent motifs which lent a structural dimension to what were on the fly inventions. While he made less use of extraneous objects, he nonetheless constantly varied his sonic palette, at one point wielding two sticks in one hand and just fingers on drumheads with the other.

In contrast to Prevost's precision, Edwards provided a more random element. He assaulted his bass, testing it to its physical limits, snapping, pulling and bending strings to their extremes. In one solo spot he combined percussive slapping of the body of the bass with grunts and foot stamps, while Prevost broadcast tight rhythmic embellishments. Nothing was out of bounds in the search for novel textures. In a later solo he moved from harmonics and high plucks to sawing under his strings and on the tailpiece, to inserting the bow between the strings for sliding glissandos.

Among Parker's strengths has always been his lightning fast reactions, distinctive burnished tone on tenor saxophone and effortless technique. One of the world's most significant saxophone stylists, his guttural torrents of rapidly tongued notes abutted one another like roughly hewn bricks in a wall. At times he unostentatiously invoked circular breathing to amplify the impact even further, in one passage interpolating longer drawn out exhortations into the unbroken ululation of gruff tenor frayed by squealing overtones.

Although spellbinding performers individually, it was together that they shone. Among the highlights was an explosion of wavering bowed phrases from Edwards which created a lovely congruence with Parker's sustained circular breathed cries. It passed in a flash of startling oratory quickly subsumed into the seasoned sense of freewheeling time. Just how slippery this perilous art is to consummate, even for such accomplished practitioners, was revealed at the end of the second set. After a spell of combustive intensity a natural end point came and went. Five minutes of low key interaction ensued, in which no-one seemed willing to initiate a new direction but at the same time seemed unable to stop, which didn't add anything to the 45 marvelous minutes that preceded it.