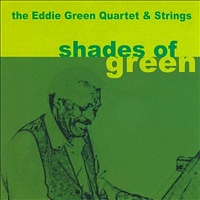 Shades of Green is the final album from Philadelphia pianist Eddie Green, who died in July of 2004. Green was a great songwriter and was very highly esteemed by vocalists for his piano accompaniment, but his greatest love was playing in a jazz trio setting. Here, his longstanding trio of bassist Tyrone Brown and Jim Miller is joined with Randy Sutin on vibes and, on three numbers, a string quartet. Two years in the making, this is not an unfinished recording: even in his ailing final months, Green was finishing piano solos and overdubs, sequencing the tunes, planning artwork, and making clear his intentions for the final mix. He wanted this album to be a worthy farewell.

Gloriously, it is. Shades of Green is a triumph. And, for once, an album's punning title is absolutely appropriate, because of the tremendous variety of the music (shown off to its best advantage by the judicious order of the songs on the CD). Eddie Green was very good at quite a few musical tasks, and he got to show them all off—and his wonderful, empathetic group—over the sixty-five minutes of this cd.

The album's opening track, "Marching Song #2," might alone be worth the price of the album as Sutin characteristically states the theme over Miller's martial, military-band snare, only to have the band move into some serious swinging. But it's Eddie's solo that is the heart of this song: it's absolutely authoritative, leaving the listener with the indelible impression that no one understands this tune and can sing through its changes like its composer. His autonomous left hand, occasionally anticipating the beat, is reminiscent of Horace Silver, but Green's his own man; his choruses combine blues licks with an extremely rigorous thematic unity and logic and, really, sound like him , not like any other player. If one can tear one's attention from Green's solo, one can marvel at Brown and Miller's focused, attentive accompaniment, always listening and responding. The title track's a winner, too, with a questioning, searching melody (again, stated by Sutin) over a simple, hypnotic vamp and great walking bass from Brown. The lineup's the same as the Modern Jazz Quartet, but Green's quartet is earthier, less European-sounding. "Passi Flora," however, is very European-sounding, as it is a Spanish mini-epic with a drum intro swiped from Gil Evan's "Solea" and a guitarrone solo from Brown that gave this listener goosebumps.

The numbers with strings are fascinating. Green wrote the arrangements for the quartet, and their role is about as far from pretty accompaniment as it can be. "Prayer Dance" is absolutely beautiful but sharply intelligent and austere, and the strings dominate the second half: essentially, they play a long, Green-composed "solo" full of interesting dissonances, essentially becoming a fifth member of the group. They play another harmonized (call it quadruple stopping if you like) "solo" on "Jazz Free," which borrows the famous riff from Eddie Harris' "Freedom Jazz Dance" (played by the strings), and, with guest Jef Lee Johnson's electric bass, more than flirts with rock. Perhaps most interesting is Green's arrangement of "Lift Every Voice," in which throbbing strings, playing in fourths, alternate with virtuosic, staggered drumming; this is as avant-garde, in its way, as John Zorn.

The album's sequencing always makes everything sound as good as it can. For example, after the demanding—head-scratching, even—bombast of "Lift Every Voice," we get the cd's other cover version, "On the Trail," which is plain old, hard -swinging, small-group jazz. The quartet seamlessly meshes, listens and responds. Sutin sounds—on this number, and on the rest of Shades of Green —like he's been playing with the other three for years, and it's during Sutin's fine solos that one can best enjoy Green's magical comping, which decorates and remarks upon Sutin's notes. Theirs is a dialogue that remains interesting and enjoyable through repeated listens, and, I think, for many listens to come.

Singers loved Green to accompany them and the album ends with classical soprano Rosella Clemmons-Washington singing Green's intended farewell, "Peace." It's transcendent, appropriate, and altogether right. Note Green's glorious piano accompaniment (he was, pure and simple, a great listening musician, whether it be to a vocalist or to his fellow instrumentalists) and note also his final solo over drums, bass and somber synth; it's as eloquent as the song's lyrics of "peace and love and hope and harmony." It's the perfect ending to an album that is somehow greater than any of its individual pieces.

Eddie Green's passing is a tragedy and a terrible loss to jazz music. Nothing can make this otherwise; but his final testament, Shades of Green , is such a fine, creative and alive document that we can all be consoled. To say nothing of entertained, engaged, and edified: Eddie got this last one right. Highly recommended.