Ed Palermo: We're Only In It For The Music

By IAN PATTERSON
November 16, 2009
Sign in to view read count

AAJ: How important a musical figure do you think Zappa is?

EP: It's not an easy question; I would say that his music played by other people will kind of always be on the fringe. Even when Zappa was alive he had a very hard time getting on the radio anyway. Even on Classic Rock stations they never play Zappa. Are you talking about jazz or classical or what?

AAJ: No, his place in 20th Century music period.

EP: It's anyone's guess whether Zappa will go down in history as one of the greatest composers ever. I certainly feel that he was. To this day I like his music better than anyone else's.

AAJ: Do you think that at any time, particularly since Zappa's death, that there is anybody comparable to him in terms of his genius, his compositional skills?

EP: Yeah, Mike Keneally. He is the most brilliant composer I've met in years and years. He's an amazing composer and a great keyboard player and guitar player. Do you know Mike Keneally?

AAJ: Only from seeing Zappa on his last tour in '88. I've never heard anything by him. Can you recommend an album which people should check out? 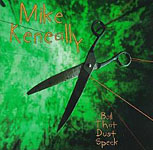 EP: I really like Boil that Dust Speck (Exowax Recordings, 1994). His music is just brilliant though it's impossible to say if it's as brilliant as Frank's or if it will ever be as influential. Probably it won't be as influential as Frank's but that's got more to do with the fact that the music business is so different now.

Zappa's music was really unique but it came at a time when there was a market for unique music. Everything was unique, everything was different. All those bands back then were totally different from one another and each had their own personality. I don't think it's like that these days and certainly bands like that aren't rewarded by record companies. So I would say that Mike Keneally has that against him.

But as far as the brilliance of his music, I would say it stands up with Zappa's. The songs go from the ridiculous to the sublime, with a huge diversity of material. I also really love Maria Schneider, Bob Mintzer and Gary Morgan. Those are three people who I think are really saying something these days.

AAJ: That's very interesting; I'm sure there'll be a lot of readers perhaps not overly familiar with Mike Keneally who will be extremely curious to check out his music based on your recommendation. Thanks for that.

Are you planning to continue recording big band interpretations of Zappa's music?

EP: I would love to but the thing I really want to do next is a CD of my own original material. I've had this stuff around for 30 something years and every few years I get them out and rearrange them to what I want to hear now. I'd also like to a CD of my Paul Butterfield project. I'd love to do an album of Edgar Winter material. All these things I'd just love to do but my only worth in the market right now is doing the music of Frank Zappa so that will probably be the next thing I do.

AAJ: Winding things up, Ed, in one of Zappa's last interviews, on NBC in '93, when asked how he thought he'd be remembered, Zappa said that it wasn't at all important to him to be remembered; I think that you, and a lot of Zappa fans would disagree with that.

EP: I saw that interview. I remember him saying that being remembered was important for people like Reagan and Bush and that they'll spend a lot of money to be sure to be remembered well. From Zappa's point of view, and here is a guy who's dying and he knows it, I can see where he would say that it doesn't matter because he's going to be dead anyway; I imagine that's what he meant by that.

I totally disagree because there are so many people out there, particularly young people, who are ready to hear some great stuff. This is music that can turn them around. Any time I perform live I'm thrilled when I see young people because I'm thinking: "Please, let this event, my concert, do for them what Zappa did for me." It is paramount in my mind that that be the case. Like I said to you before, I remember that first Zappa concert like it was yesterday—that's how powerful it was.

Believe me, young people eat this stuff up, the young people I've met and I do quite a lot of teaching—they don't seem to be of that demographic of people that only want to hear the bullshit on the radio. I hear them talking about Chick Corea, and they're thrilled that they have a teacher who does the music of Frank Zappa. These kids are of an age, as I was when I first saw Zappa, where they are soaking it all in.

Although I couldn't understand technically what Zappa's bands were doing at all the first time I saw them in '69, but emotionally, and just being thrilled by the sheer virtuosity on display. If I can have that effect the same way Zappa had on me then that really feeds my soul.

Ed Palermo Big Band, Take Your Clothes Off When You Dance (Cuneiform Records, 2006)

All Others: Courtesy of Ed Palermo