By IAN PATTERSON
October 20, 2009
Sign in to view read count 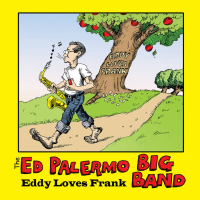 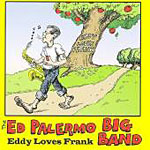 Saxophonist and bandleader Ed Palermo loves Frank Zappa, and not just a little bit. It's not only the transcribing of 200 Zappa tunes, the scores of concerts where Palermo has led his big band through the late Zappa's music, nor the three CDs celebrating his music which Palermo has recorded to date; it's also the fact that Palermo considers Zappa worthy of the same acclaim accorded fellow American composers such as Duke Ellington, Charles Ives, Samuel Barber, George Gershwin and Cole Porter. Zappa's proclivity for satire and jest, sometimes rather facile, means that he will always be treated with raised eyebrows in some quarters, perhaps not surprising for the author of a song titled "Titties and Beer." Zappa however, had a classical composer in him screaming to get out, and as Eddy Loves Frank and the previous two Palermo CDs of Zappa's music underline, there is tremendous complexity and beauty in Zappa's music worthy of reconsideration.

Zappa penned some gorgeous tunes, such as "Peaches en Regalia," "Sofa" and "Watermelon in Easter Hay," and although Palermo interpreted the first two of these tracks on Plays the Music of Frank Zappa(Astor Records, 1997)he seems drawn to the more challenging Zappa compositions, stripping them to their melodious bones and then layering his own lavish arrangements on top. "Night School," from the complex, Synclavier dominated Jazz from Hell (Barking Pumpkin Records, 1986) is a case in point. Here Palermo weaves the strands of his brass section together to create a tapestry which reveals the beauty and drama within the composition. The short section where the brass instruments spiral down and around is as enthralling as it is beautiful. When Palermo's 16-piece big band is in full flight it sounds like a modern incarnation of Duke Ellington's, and there can be no higher praise. Palermo is blessed with outstanding musicians, something of a prerequisite for attempting much of Zappa's music.

Palermo's big band is guided by the melodic contours of Zappa's compositions, and some sections are completely faithful to the original, like the devilishly difficult parts of "Echidna's Arf (Of You)" from Zappa's seminal live album Zappa/Mothers: Roxy & Elsewhere (Disc Reet Records, 1974.) The cascade of swirling notes executed at speed in an exhibition of exhilarating ensemble playing must have taken an age to transcribe, and must surely have shredded a few nerves in rehearsals. At almost 10 minutes this number weighs in at three times the length of the original, as Palermo's stylish, swinging arrangements and the short, snappy solos place his own indelible stamp on the music.

The rhythm section of bassist Paul Adamy and drummer Ray Marchica inject swing into "Regyptian Strut," from Sleep Dirt (Discreet Records, 1979) and Phil Chester and Joe Fiedler play notable solos on soprano sax and trombone respectively. On "Don't You Ever Wash That Thing?" Ted Kooshian impresses on organ, as does Bruce McDaniel on guitar. McDaniel's style is much cleaner sounding than Zappa's, and he succeeds in bringing some of the same excitement that characterized Zappa's own solos. The tune proceeds towards a seemingly inevitable climax, with soaring guitar sure to steal the glory, only to end in one of those cartoon caper motifs much loved by Zappa and which serves almost as a punch line. For Zappa and Palermo both, humor definitely belongs in music.

The humor, the musical flatulence, the monster motifs, jingles and cartoon themes which peppered Zappa's compositions tended to mask the serious composer of modern classical, avant-garde works who emerged more fully towards the end of his life. Conductor Pierre Boulez embraced Zappa's music on Boulez Conducts Frank Zappa: The Perfect Stranger, (Angel Records, 1984) from which Palermo's big band executes an energetic and quite dazzling interpretation of "Duprees' Paradise." This track has incidentally, also been recorded by brass quintet with a difference, The Meridian Art Ensemble, on Smart Went Crazy (Channel Crossings, 1993).

In treating Zappa's music minus the lyrics, Palermo has helped highlight the depth of Zappa's compositions. "What's New in Baltimore" features a lovely piano solo from Bob Quarenta and a lively tenor contribution from Ben Kono, but on this track as elsewhere on the album it is the big band as a single, cohesive unit which is the real star. Although many of Zappa's line-ups functioned like little big bands, he rarely enjoyed the luxury of touring with a big band, with the exception of the 1972 Grand Wazoo tour, when his band contained 20 musicians including a 12-piece horn section. It is quite likely that had circumstances permitted him to tour and record regularly with an ensemble of the size and quality of Palermo's then he might have produced even more serious music.

The album closes with a rendition of "America the Beautiful." It's exactly the sort of tune that Zappa might have parodied in these times of war on multiple fronts and economic meltdown, but this thoughtful arrangement, with the brass section largely sitting out, is a heartfelt rendition dedicated to Palermo's father, a World War Two veteran. Once past the lyrics, sung by Bruce McDaniel, the composition takes on a quite epic tone, blending power and beauty. After an arresting organ solo by Kooshian, McDaniel's guitar glides gracefully into the distance accompanied by the beautiful vocals of Veronica Martell.

In one of his final interviews on the Today Show in 1993, Zappa stated that being remembered was of no importance to him. His legions of fans would no doubt disagree, and Ed Palermo and his wonderful big band concur on this recording, in emphatic, glorious style.