By JAKOB BAEKGAARD
July 5, 2018
Sign in to view read count 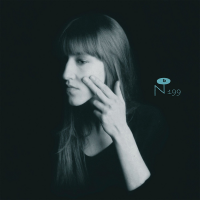 Music is a sanctuary from the world, but it is also a connection to the same world that one would like to escape. While ordinary language can fail in expressing feelings, music when it's best becomes an extension of breathing, a way of being.

This urgency in musical communication is felt in singer and songwriter, Happy Rhodes. Followers of guitarist William Ackerman might know Rhodes from her appearance on his album Hearing Voices (Windham Hill, 2001), but she is also championed by a close circle of listeners, who cherish her distinctively dreamy universe of song. Hopefully, the circle of listeners will expand with the release of Ectotrophia, a collection of tracks picked from her early cassette releases in the 1980s.

Numero Group is the label behind the release and the high standard in reissues is present as always. The 48-page booklet contains an eloquent biographical essay about Rhodes written by Erin Osmon. It pinpoints her musical influences and describes the difficult circumstances that she had to survive. However, the brutal environment of a school with bullies never succeeded in suppressing her gentle and friendly spirit that was embodied in her name. Although born Kimberley Tyler Rhodes, she changed her name to Happy, a name given to her early by her brothers to describe her personality.

The happiness that comes across in the music is the deep kind that acknowledges all aspects of the human soul. The monsters were not hidden away, but literally put on the front cover of the early tapes that were graced by her monster drawings. The music itself has drawn comparisons to Kate Bush and Annie Lennox and one might add Elizabeth Fraser, but the soaring voice, spanning four octaves, is the sole expression of Rhodes' own personality.

The music is both lush and sparse in the sense that it draws primarily on acoustic guitar, synthesizer and voice. However, there is nothing sparse about the compositions that are complex, baroque and subtly orchestral. The complex pop opera of Queen shines through in the way that Rhodes lifts her voice in spiraling lines and the influence of the electronic version of J.S. Bach on the album Switched on Bach is evident in the fugue-structure found on many pieces, but there is also the profound percussive beauty of "When the Rain Came Down."

The lyrics are poetry and the texts able to embrace the paradox of feelings, whether it is the need to keep a necessary distance to a friend on "I Don't Want to Hear It" or the middle-state of being both awake and asleep in "I'm Not Awake, I'm Not Asleep." Perhaps, the existential paradox is most succinctly summed up in the haiku-like precision of "To Be E. Mortal": "Oh to be / Die to be / Want to be / Die to be / Live to be / Die to be / Be to be / To be E. Mortal."

In 2018, it is many years since Rhodes has released new music and it's impossible to tell whether she will make more music, but one can only hope. No matter what, she has already given more than can be expected and Ectotrophia is the perfect entry into her discography.

Oh The Drears; I Cannot Go On; Would That I Could; Where Do I Go; For We Believe; When The Rain Came Down; If Love Is A Game, I Win; I’m Not Awake, I’m Not Asleep; Baby Don’t Go; Come Here; Don’t Want To Hear It; If So; I’ll Let You Go; Because I Learn; I Am A Legend; Perfect Irony; Many Nights; To Be E. Mortal.