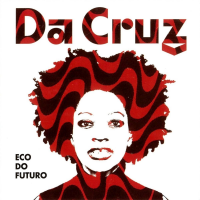 The chronology: Eco Do Futuro is the fifth album by the band named for leader and vocalist Mariana Da Cruz. All four previous Da Cruz releases reached the US college radio chart top ten; they recorded all five in their own studio, Boom Jah Studios in Switzerland.

From the opening "País do Futuro," Mariana's roaring, cooing, purring, soaring voice suggests a young Chaka Khan's, floating above yet digging into the music, while harmonizing horns dance into an African horizon. Guitarist Husman and drummer Lee drive "Sinhá Mandou" with the African funk rhythms and sounds that David Byrne so famously (and often) appropriated for Talking Heads. Durrer's saxophone scrambles the break into musical froth, while electronic effects on Hürny's trumpet sound like Jon Hassell wandering into a Brazilian disco and further this Byrne/Heads connection.

"Fama de Bacana" pulls these Africanisms into a darker, more electronic jungle sound that slowly grows from skeletal electronics into a thick and lusty groove, while "Centro do Mundo" bounces as a celebration song off of the drummer's rocking and rolling, Columbian cumbia beats.

Eco Do Futuro introduces sounds and rhythms from the African diaspora into Da Cruz's glistening, seamless blend of Brazilian and European dance and club music and, with them, their music sounds more full and complete.