By JEFF DAYTON-JOHNSON
May 6, 2008
Sign in to view read count 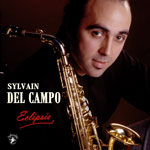 Saxophonist Sylvain del Campo's quartet is the sort of group favored by Aphrodite Records label boss Jean-Jacques Grabowski: earnest journeymen who, in the midst of uniformly good performances, manage from time to time to pull off remarkable moments.

For del Campo, the remarkable moments begin early on Eclipsis, with a frenetic sax-plus-drums passage midway through the opening track, "Epicentre"; though Del Campo's instrument is the alto saxophone, here he places himself squarely and athletically in the lineage of both the tenor and soprano playing of John Coltrane. This initial highlight is followed closely by the title track, a marvelous mid-tempo number, again in the vein of Coltrane, from the tail end of his Atlantic years in the early 1960s.

Del Campo is a thoughtful improviser, the way some young music-school graduates are, but he's been on the scene slightly longer than they have and the maturity shows. His sound is tinged from time to time with a little nasal quality, a wavering querulousness like that of the Moroccan rhaita. And in case the connection is not clear, you can hear the genuine article in some atmospheric Moroccan street noise included at the beginning of "Place Jamàa El Fna," named for the fabled Marrakech plaza where drumming and rhaita can be heard all night long. This North African element is reinforced by a tendency, deployed judiciously, to embellish phrases with vaguely Arabic-sounding lines (for example, on the lovely ballad "Confidence"), as Yusef Lateef might do.

Pianist Sergio Gruz has a highly personal, strong way of playing, which combined with apparent idiosyncrasies in the recording conditions sometimes makes his instrument sound like a tack piano or an electric keyboard (which it may be, but there's no indication in the liner notes). This is not altogether an unpleasant sensation, and on the loping theme of "Métamorphose," the effect makes him sound a little like both Thelonious Monk and Milt Jackson playing at the same time on one of those great 1954 Miles Davis sessions. Gruz's pulsating solo on "Eclipsis" might be his best here, though all votes for his all-too-brief intervention on "Les mots du silence" will be duly considered.

Bassist Juan Sébastien Jimenez and drummer Francis Arnaud round out the quartet ably, playing an important role in a band that tends toward the faster tempos.