By WOODROW WILKINS
April 8, 2009
Sign in to view read count 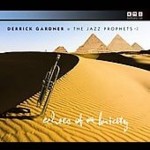 Big band music is alive and well, even if presented by a not-so-big band. Derrick Gardner & The Jazz Prophets is a six-piece ensemble, supported by four additional players for Echoes of Ethnicity.

The basic lineup consists of Gardner on trumpet and flugelhorn, brother Vincent on trombone, tenor saxophonist Rob Dixon, pianist Rick Roe, bassist Gerald Cannon and drummer Donald Edwards. Derrick Gardner has led The Jazz Prophets since its inception in 1991 and counts among his influences Freddie Hubbard and Woody Shaw. He has worked with artists including Harry Connick, Jr., Dizzy Gillespie, Nancy Wilson, Rufus Reid, and George Benson. Though the label identifies the group as Derrick Gardner & The Jazz Prophets + 2, it should be "+ 4." In addition to two guest saxophonists, a bassist and a percussionist contribute.

"Afros & Cubans," one of two songs penned by Vincent Gardner, is a Latin piece that features guest percussionist Kevin Kaiser. Gardner's high trumpet is paired with a soprano sax while the other horns carry a backbeat. Dixon's tenor solo is rich, complemented by piano, bass, drums, and congas. When the horns return, the sound is a bit dissonant, a sharp contrast to the elegance of Roe's piano solo. During the closing sequence, Edwards answers the horn calls with emphatic tom rolls, working in the cymbals and snare.

The band covers Hubbard's "The Melting Pot," with the entire horn section blending together on the melody while bass, drums, congas, and piano underscore. Derek's solo is suitably Hubbardesque, his solo broken up by the other horns, which complement him briefly before bowing out again, only to return in time to segue to Vincent's trombone feature. Dixon and Roe also solo.

Dixon's "Crystal Stair" begins with the horns playing softly. Roe, Edwards, and Kaiser lay down an effective backdrop, with a series of solos—two saxophones, trumpet, and piano—helping to flesh the piece out. It's more subtle than most of the album, but no less engaging.

Impressions of Gillespie, Shaw, and Hubbard come through in this session. Echoes of Ethnicity showcases not only the songwriting strength of Gardner and his band, but also the solid interplay of these musicians. Though Gardner is the leader, this music is about the whole band.