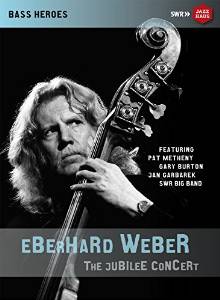 German bassist Eberhard Weber's 75th birthday celebration has already been documented in audio form on Hommage à Eberhard Weber (ECM, 2015). This video document more fully captures the celebratory tone of the event, includes a bit of bonus material, and perhaps most importantly, presents Pat Metheny's composition "Hommage" as the multi-media event it was created to be.

Weber was both the honoree and the guest of honor for the concerts in Stuttgart on January 24 & 25, 2015. After coming onstage at the beginning of the show, he then acted as Master of Ceremonies, announcing the guest musicians joining the SWR Big Band, as well as commenting on the performances and telling brief stories (in German). The guests embraced him as they come onstage, giving the whole proceeding a warm personal touch that is not conveyed by audio alone.

The video includes Libor Sima's big band arrangement of "Street Scenes"—a piece from Pendulum (ECM, 1993), Weber's "solo" album which utilized overdubbing and echo effects—previously only released on the download version of Hommage à Eberhard Weber. It features solos by Paul McCandless on English Horn and vibraphonist Gary Burton, and was surely left off of the CD purely for space reasons.

The other bonus track is the jazz standard "Killer Joe," composed by Benny Golson and arranged by Michael Gibbs. Not an obvious choice, but it gives Weber the chance to participate as a performer, now that he is unable to play bass. He shares the vibraphone with Burton in a kind of piano four hands fashion, playing the treble end with a single mallet in his right hand. He's responsible for playing the head, and also plays a brief solo. The other soloists are trombonist Helge Sunde, trumpeter Manfred Schoof, and Paul McCandless playing a rare straight-ahead jazz solo on soprano sax. Not the strongest selection musically, but a charming reminder of the purpose of the night.

Pat Metheny's "Hommage" is the centerpiece of the program. If ever a jazz composition deserved to be filmed, this is it. Metheny couldn't imagine a Weber tribute without the distinctive sound of his bass playing, so he found live Weber solo bass performances on video from 1986 and 1988. He based his big band piece on this music, incorporating Weber's video performances into the structure of the piece via a large projection over the stage. I was present for the Detroit performance that followed these, and there is certainly no substitute for the power of a live big band, coupled with the awesome presence of a larger than life Weber via projection. But the video comes much closer than audio alone. It makes the interplay between the recorded bass and the band much easier to see (literally).

This is especially true of bassist Scott Colley's role throughout, a virtuosic performance in which he constantly moves between doubling Weber's recorded lines, accompanying, or soloing himself. Among the other striking recorded/live interactions are a Weber solo accompanied by the guitars and a section after Metheny's guitar synthesizer solo with call and response between the horns and Weber's bass. It's a thrilling performance—also featuring exciting contributions from vibraphonist Burton, drummer Danny Gottlieb, and of course composer Pat Metheny on guitar—made immersive by the multi-media experience.