By JOHN KELMAN
February 4, 2013
Sign in to view read count
And it's a shame, because DiPasqua may not have the chops of some of the young up- and-comers, but he had/has a touch that made him not only the ideal player back in the '80s but also the perfect choice to add some percussion work to Résumé's up- tempo "Bochum" and more ethereal yet still grounded "Lasize." "Michael may not have the chops he had 20 years ago," Weber concludes, "but the musicality is still there, and you can hear it on the record—the experience."

Much of Résumé was done in Weber's home studio, with Garbarek and DiPasqua's contributions coming in as files recorded in their own home studios. "I did everything at home," says Weber. "I did a rough mix for myself, but I know my equipment is not good enough to be professional. So I asked Manfred to take my hard disk to a real studio where it could be mixed professionally. So we were in the studio together; Manfred was there—even Michael was there—and we all mixed it together. Mike stayed with me because I have a guest room in my house. And then he went home." 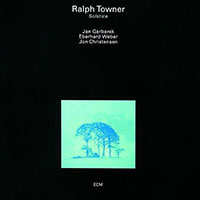 But if Weber has been forced to face the inevitable consequences of aging, so, too, has the considerably younger DiPasqua, who will just be turning 60 later this year. "Now comes another sad story," says Weber. "Mike went home, and we talked about staying in contact, but I didn't hear from him anymore, and I wondered what was wrong. I wrote e-mails that he didn't answer. Slowly, after little while, he wrote that he was with his wife in the Caribbean, and he had a heart attack. Actually, his wife informed me that Mike suffered from several heart attacks, and he was reanimated something like five times. He's much better now. They rescued him, but he died five times. Some people seem to think that the dying process is not so bad—you see the light at the end of the tunnel or whatever. Mike said that he did notice he was dead five times; he said he obviously realized he was going to die and says it was an experience he would not recommend [laughs]."

But Weber maintains both a positive and pragmatic viewpoint: "If it happens, it happens. It was a nice life. And I had lots of good experiences, lots of fun. So I don't regret anything. If I could look down on me later—which of course I can't—I would say it was not so bad, what I did."

So with the next album more or less complete, what's next for Weber? "I do have about 100 solos, meaning about 15 hours of music altogether," he says. "I have listened through most of it, and as I said, I hated myself throughout the years when I played, but there must be a few other things which could be used. The technician once told me that he had another 400 tapes, but he moved in with a new girlfriend to a very humid house and tried to put on these old DAT cassettes. It turns out that there are cracks, and he believes that these 400 tapes are ruined. I asked him to try again, but I haven't contacted him lately, so I don't know whether he's been able to do anything or not.

"Who knows how long I'm going to live is the other question, of course; I'm 72—in a short while, 73—and that's a considerable age. But I'm vain enough to say that when I'm forced to do something, I'm sure that I will find something. I've no idea what that something I will find will be. I still believe in myself. As long as I can still think and talk, there will be something to come at some point."

All Other Photos: Nadia F. Romanini, Courtesy of ECM Records