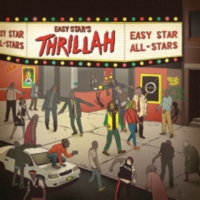 Ten years ago, the Easy Star All-Stars began a series of albums that transformed landmarks of pop musical culture into thick and easy flowing reggae. They started with Dub Side of the Moon (2003, Easy Star Records) (from Pink Floyd's Dark Side of the Moon), continued through Radiodread (2006, Easy Star) (from Radiohead's OK Computer) and then re-visioned The Beatles' Sgt. Pepper's Lonely Hearts Club Band as Easy Star's Lonely Hearts Dub Band (2009, Easy Star).

But where could the Easy Star All-Stars (ESA) go after John, Paul, George and Ringo? Well, why not one of the biggest and best-selling albums of all time: Thriller, Quincy Jones' masterblaster Michael Jackson production. "For me, I was most excited for Thriller," explains ESA producer, arranger and guitarist Michael Goldwasser. "I was always more of an R&B/soul and reggae kid growing up and I have an intense personal connection to Michael Jackson's music."

"Writing the arrangements for this album was a cool challenge," Goldwasser continues. "I didn't have to try to make non-dance music into dance music as on our previous albums because the original Thriller is so danceable already. I needed to find ways to make each song groove in a different way from the original version. I didn't want any of the arrangements to be obvious in that regard."

The best way to dive into Thrillah might be to start with the last two songs: "Dub It," a dub mix of its remade "Beat It," and "Close to Midnight," a cavernous and booming dub of its title track through which horns, guitars, percussion and melodica wash in and out of echo like Vincent Price's ghost.

"The Lady in My Life" and "Billie Jean" are Goldwasser's two most striking rearrangements. He drops most of the accompanying instrumentation and frees vocalist Christopher Martin to delightedly slowdance with "The Lady" dressed in only bass, drums and melodica, which floats like a butterfly trailing behind his vocal. A churning, slightly grungy bass line drives "Billie Jean" to a completely different, more confrontational yet still danceable destination.

Hey, why not Metal Machine Music next?