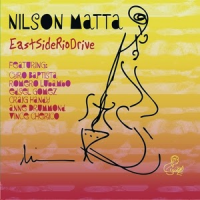 Many a bassist is renowned or applauded for the way they serve as ballast in a band, but what of the bassists who go the other way, providing lift instead of weight? There are precious few of them out there, but Nilson Matta is one one of them. Matta, whether working with the collectively-operated Trio Da Paz, backing cellist Yo-Yo Ma, playing with any number of legendary jazz figures, or working his own projects, tends to do something that few bassists are capable of: he effervesces, helping the music to bound and fly with his every gesture.

On EastSideRioDrive, this estimable Brazilian bassist brings together a killer crew, but instead of using a set band for the whole project, he changes it up drastically from track to track, rotating members of a set cast in and out of different settings. One number might give pause to admire the chemistry between Matta and flutist Anne Drummond ("Mojave"), another may be a jamming party piece driven by Romero Lubambo's guitar riffing and strumming ("Sertao"), and a third may dreamily float along, as Craig Handy's bass clarinet and flute glide over Lubambo's guitar and Cyro Baptista's understated percussion ("Luas De Nadine"). There's also piano-centered beauty to be observed ("Verde"), peppy music to get the body moving ("E Menina (Hey Girl)"), and a dreamy dose of Jobim that pacifies and pleases the ears ("Angela").

In addition to the aforementioned material, Matta also makes his mark with some nods to jazz giants. He includes something of a double-barreled salute to Charles Mingus, with a solo bass original ("Proemio Do Mingus") and a classic that's less hard-edged and more buoyant than usual ("Boogie Stop Shuffle"), and a soft-hued nod to Miles Davis ("Blue In Green"). Each of those pieces are different, yet all feel right at home here. Matta's comfort zone is expansive and his musical personality is warm and inviting, allowing him to comfortably work so many different musical angles with various configurations on the charming EastSideRioDrive