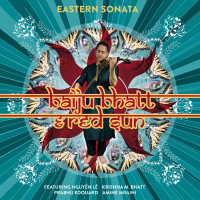 Is there a term for the opposite of culture shock? Whatever it is, it's also the guiding theme behind Baiju Bhatt and his Red Sun ensemble. Their studio debut, Eastern Sonata, is a figurative travelogue from start to finish, but there's nothing jarring or shocking about it. A conventional Western lineup (piano, bass/drums, saxophone) is led by Bhatt's always-fiery violin and enhanced with sitar, oud and other instruments. However exotic the sounds and compositions get, the result hits the ears as pleasantly as the scent of lotus blossoms.

Bhatt's musical background is primarily rooted in India, but his music reflects the likes of Pat Metheny or Keiko Matsui as much as Shakti. "Pari Shokogun" offers something of a summarizing preview to start, driting from sinuous desert motif to jazzy sax solo and back. It's similarly rare for any of these tracks to stay in just one mode; instead each one makes a small journey in itself. The breezy "Upper Welsch Side" lopes along in club-jazz style, then adds some Asian spice with tabla and flute. "Kintsukuroi" (named for the Japanese art of repairing broken pottery with gold) illustrates its title by breaking down the funk groove and eventually bringing it all back together after a little loose-drifting improv.

If unity is the theme behind the songs, it's just as true of Red Sun itself. The band embodies that ethos with enough joy to energize several different chakras. Bhatt's pieces keep his silky violin entwined in lockstep with spots of dynamic piano and earthy percussion, then leave everyone space to make their own sparks. Whatever the mode, the players' chemistry is the true heart of things—just as it should be for an affair so spirited, generous and full of positivity.