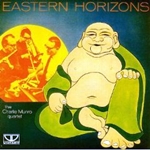 The statement that jazz music has universal appeal is a well-worn cliché, but like most, a very true one. This is no more evident than in Eastern Horizons, a long out-of-print classic from Australian cellist and multi-reed player Charlie Munro, now available on CD. Recorded in 1967, it is considered to be a landmark of Australian jazz, which is basically a blend of jazz and quintessential American music played by non-Americans, and Eastern music played by Westerners. Such a description might suggest otherwise, Eastern Horizon is anything but a cheesy record.

Although not for purists, Munro—supported by a bottom-heavy bass sound with trombone and percussion—succeeds in producing a compelling work of art where Eastern time signatures, jazz improvisations and Western classical harmonies meld seamlessly. The music is sometimes modal in structure, and occasionally freer in style, but never loses its mellifluousness.

This record has been compared to Pharoah Sanders' Karma (Impulse!, 1969) and Alice Coltrane's Indo-centric recordings. Apart from the fact that all of these recordings draw inspiration from Eastern music, there are very few similarities between them. While Sanders and Coltrane induce the feeling of meditating in a quiet, incense-perfumed temple, Eastern Horizons is more like traveling to, or viewing a film about, exotic locations.

The musical interaction amongst the quartet members eschews the traditional labor division of frontline and rhythm section for a more egalitarian distribution of solos and flights of musical ideas. Munro exhibits equal virtuosity on both reeds and cello, while the others also excel on their respective instruments. The sound of the CD has been impeccably remastered with new notes and photos added to the original booklet liner notes and handsomely reproduced cover art.

An intriguing record with an exotic sound from a part of the world not well known for its jazz, Eastern Horizons rewards and delights with repeated listens.