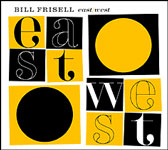 Jazz musicians are relentlessly struggling to find a unique sound on their particular instruments. However, only a very few can lay claim to discovering their own voice, let alone engendering an entire genre. Bill Frisell is one such artist. His style of jazz exists at the crossroads between the disparate idioms of jazz, blues, and country. While many artists endeavor to be on the "cutting edge of jazz, Bill Frisell has withdrawn even further into his own realm. His latest release, East/West, demonstrates his trio's exploration of all the possibilities of his unique musical world.

In the sphere of jazz guitar, two names repeatedly come to the forefront: Wes Montgomery and Jim Hall. The sound of these two guitarists is the yardstick against which all others are measured. East/West presents a view of a guitarist without anything to prove. Bill Frisell takes his time with each note and phrase, seeking to move his audience through subtlety rather than by blowing it away with hyperbole. On "My Man's Gone Now, he demonstrates the patience with which he can develop his ideas. Moving slowly, he builds the intensity of his music through his use of space, giving each note added weight through anticipation. On East/West, his sound has gained a sense of maturity: a judicious, measured approach to playing that gives every idea its full value.

Like all successful leaders, Frisell chooses sidemen well. East/West captures his current trio in two live settings and two configurations: disc one (West) at Yoshi's in Oakland, and disc two (East) at the Village Vanguard in New York. Both feature the highly sensitive drumming of Kenny Wollesen, a mainstay on Bill Frisell's latest recordings. Wollesen is part of a new breed of jazz drummers who are capable of playing a shuffle, traditional bebop, or totally free abstraction with equal aplomb.

The West trio is completed with Viktor Krauss on bass (also featured on Nashville, Good Dog, Happy Man, and The Sweetest Punch), and the East trio features Tony Scherr (who appeared on the Grammy Award-winning record Unspeakable). On East, Scherr's thick tone adds depth to Frisell's sound, contributing low-end weight and counterpoint to his ideas on tracks like "People. On West, Viktor Krauss underpins freewheeling pieces such as "Blues For Los Angeles and more traditional songs like "Shenandoah with equal conviction. Bill Frisell knows how to put a band together, and the playing of sidemen Viktor Krauss, Tony Scherr, and Kenny Wollesen attest to this fact.

East/West shows Frisell forging deeper into his own unique musical world. His shrewd playing and deliberate use of space make his musical statements seem inevitable. Kenny Wollesen, as much a colorist as a drummer, complements his every move with uncanny precision. Bassists Viktor Krauss and Tony Scherr drive and fill out the music as much with a steady undercurrent as with contrapuntal interaction. East/West is a landmark recording for Bill Frisell, as much for its original sound and approach as for its dynamic interplay.