By WOODROW WILKINS
February 3, 2009
Sign in to view read count 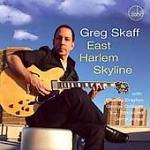 The organ-led trio has long been a fascination for guitarist Greg Skaff—especially when a guitar is involved. So it follows that he borrows from the playbooks of guitarists like George Benson and Wes Montgomery, and organists like Jimmy Smith and Don Patterson.

"Willie D" is part throwback to early rock fusion. Skaff leads in a freestyle rock mode. Laks, Jones and Drayton make their only appearance count. For the remainder of the set, Strickland carries drum duties, and Colligan uses the organ to cover for the bass. This element comes through strongly on Shorter's "Angola." Skaff's play is clean and crisp. Strickland works the cymbals effectively, while Colligan adds plenty of depth. Colligan also contributes a Smith-like solo.

If Skaff original "Tropicalia" has a Brazilian feel, it's because of the song's inspiration: the word itself is the name of a musical movement in Brazil, but the title also is influenced by Tropical Truth, an autobiography by singer Caetano Veloso. It's a charming, easygoing piece in which Skaff, Colligan and Strickland do plenty of stretching out. Strickland is especially effective during the closing sequence, scoring on the snare and toms with vigor.

Colligan is more of a force on "Twenty Three," named so because of the number of bars in the melody. The organist leads through most of this selection, with Skaff mostly in a rhythm guitar role. Strickland, as throughout, is sharp in mixing the snare, toms and cymbals.

With East Harlem Skyline Skaff reinforces his mark to be considered among the guitar/B-3/drum trios whose styles he honors.