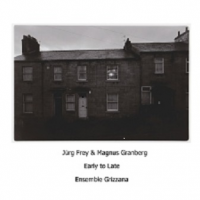 Jürg Frey and Magnus Granberg are two of the musicians who feature most frequently in the Another Timbre catalogue. So, when the label commissioned two new works in 2015, it was no surprise that they were the chosen composers. Performed by Ensemble Grizzana, including a stellar line-up of AT regulars alongside Frey and Granberg themselves, the resulting pieces were premiered at the Huddersfield Contemporary Music Festival at the end of November 2017, receiving a prolonged ovation and rave reviews. Fortunately, immediately after that concert, both were recorded and have been issued together on Early to Late so they can now be listened to and savoured repeatedly.

When commissioning the pieces, AT proprietor Simon Reynell expressed a wish that their music should have some kind of relation to Renaissance music, and this led to the compositions being based on Déploration sur la mort de Binchois by Johannes Ockeghem and O Lord, How Vain Are All Our Frail Delights by William Byrd. In fact, the new works sound like distant cousins of those that inspired them; it is possible to hear traces of the older works, but those of Frey and Granberg are stronger. Although some listeners may choose to check out the Ockeghem and Byrd compositions, the new works can be fully appreciated in their own right without knowledge of the older ones.

One of the many fascinations of Early to Late is that Frey and Granberg were given the same brief and ended up producing different end results. Granberg's ethereal "How Vain Are All Our Frail Delights?" allows players greater individual freedom than Frey's more tightly co-ordinated "Late Silence." In addition to the core instruments, from the options available within Ensemble Grizzana, Granberg and Frey chose to add quite different instruments, giving their pieces contrasting sound palettes; Granberg played celesta on his own piece alongside glass harp and dulcimer played by Simon Allen, zither by Dimitra Lazaridou-Chatzigoga and electronics by her, Richard Craig and John Lely; Frey chose for Granberg and Lely to both play harmonica and stones.

Despite such methodological differences, Frey's and Granberg's works complement one another so perfectly that they sound designed to be heard together. By meticulous placement of silences and sounds, each of them slowly but surely creates a mood compatible with Ockeghem and Byrd, one of exquisite melancholy. The resulting music is so subtly restrained and beautiful that anything played immediately after it can easily sound crass or tawdry by comparison. Consequently, this is one of those rare albums that one feels compelled to play again as soon as it is over. Ultimately, Early to Late must be judged to be a quintessential Another Timbre album, and surely there can be no higher recommendation than that. Already on my 'best of 2018' list.

How Vain Are All Our Frail Delights?; Late Silence.