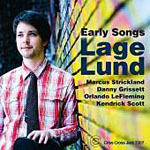 Never judge a book (or jazz recording) by its cover, as the inconspicuous album portrait of Lage Lund's Early Songs is little indication of the music's impressive content. From Norway, Lund resides in New York and has performed within traditional boundaries (Mingus Big Band, Wynton Marsalis, Ron Carter) and newly progressive terrains (Jaleel Shaw, Seamus Blake, and David Sanchez). The winner of 2005's Thelonious Monk International Jazz Guitar Competition, Lund's guitar acumen is informed of Pat Metheny, Pat Martino and other greats. Yet, he seeks his own path, as heard in the new breed of jazz guitarists such as Miles Okazaki and Mike Moreno.

This debut on Criss Cross is a good introduction to Lund's tonality and confidence that is well beyond his youth with a mix of originals and standards showing a range of stylistic impressions. Whether it's the progressive "Scrapyard Orchestra," gentle swing on "Poppy" or the crisp remake of Bud Powell's "Celia," the music is immaculate and cohesively delivered by an impressive lineup of jazz contemporaries.

Marcus Strickland's musical rapport with Lund was witnessed on Strickland's Twi-Life (Strick Muzik, 2006). The saxophonist's vigorous tenor has its usual luster but his soprano also radiates on "About the World in a Bottle" and "Vonnegut," a wicked snaking piece that is one of the recording's highlights. Orlando Le Fleming and Kendrick Scott (bass and drums, respectively) are the rhythmic center, while pianist Danny Grissett is another name to watch as attested by his fantastic solo on Cole Porter's "You Do Something To Me" where Scott's drumming is also quite memorable.

Lund's playing is pristine on "Quiet Now" showing his acute deference for ballads—each note, chord, and movement is melodious. The recording closes with sophistication on "The Incredibly Profound Song." It personifies the auspicious recording to an ironic point. No earth shattering revelation or hyperbolic self indulgence; just some seriously intelligent and appealing music from an unpretentious yet exceptional musician.

Scrapyard Orchestra; Poppy; You Do Something To Me; Vonnegut; About The World In A Bottle; Quiet Now; Celia; The Incredibly Profound Song.