By DAN MCCLENAGHAN
April 16, 2010
Sign in to view read count 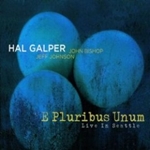 Pianist Hal Galper began his journey into "rubato" playing early on in the new millennium, after a quite vibrant career in the mainstream, playing and recording with the likes of all-star alto saxophonists Phil Woods and Cannonball Adderley, legendary trumpeter Chet Baker and guitarist John Scofield. It hasn't always been a smooth ride. At a show with guitarist John Stowell at Carlsbad, California's Museum of Making Music back in 2007, drawing a rather conservative crowd—a group of listeners that was expecting, perhaps, a traditional approach to the standards—grumblings could be heard in the folding chaired audience, hushed comments like, "Why doesn't he play "How Deep is the Ocean" straight? I almost couldn't recognize it."

The term "rubato" refers to a flexibility in approach to tempo, the speeding up or slowing down of the rhythm at the artists' discretion. Nobody does this quite as furiously as Hal Galper, and with bassist Jeff Johnson and drummer John Bishop, he has hooked up with two like-minded compatriots.

Previous Galper recordings in this style include Agents of Change (Fabola Records, 2006), Furious Rubato (Origin Records, 2007), and Art-Work (Origin Records, 2009). All of these are exciting musical adventures, but E Pluribus Unum—with, again, Johnson and Bishop—is the most electrifying of the batch, due certainly to the on-the-edge freshness and vitality of the sound's live aspect.

Irving Berlin's "How Deep is the Ocean" opens the show, and it is a turbulent sea, wind whipped and wildly churning. The trio plays with a sense of abandon, but the thread of the familiar melody doesn't break. Other non-originals include a particularly prickly version of Duke Ellington's "Take the Coltrane," and a calamitous reading of Charlie Parker's "Constellation" to close the show. In between, Galper includes four tunes from his own pen, starting with the searing, headlong "Rapunzel's Luncheonette," the reflective but still energetic "Wandering Spirit," and the aptly-titled "Invitation to Openness."

The appreciative crowd, the night of this recording at the 2009 Earshot Jazz Festival, accepted that invitation, and E Pluribus Unum permanently documents Galper taking his artistry to a new level.