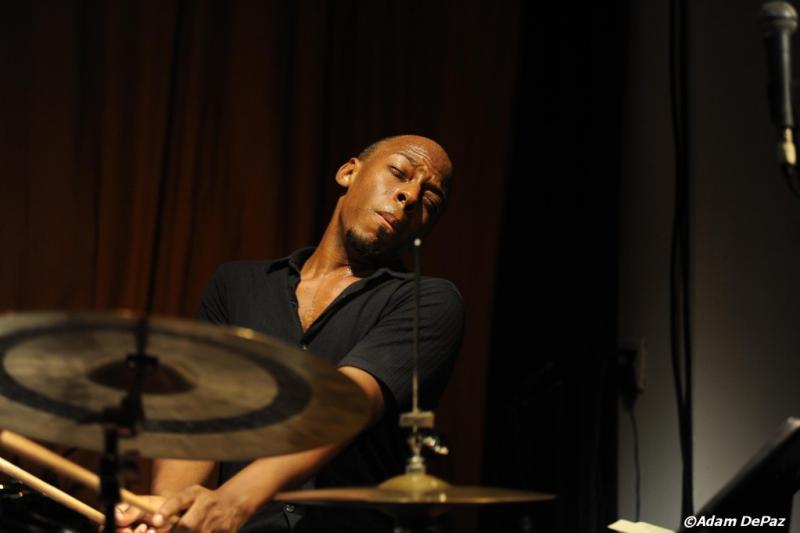 "A lot of people ask, you know, what the state of jazz is. I love what's going on." E.J. Strickland's mellow baritone is measured and thoughtful as he spoke from behind the drum set. This is the last tune of the evening, and after spending the past 90 minutes with Strickland and his quintet, I'm inclined to agree with him. If this is what jazz sounds like in 2017, then it's a good year to be a music fan.

"Measured and thoughtful" makes a good epithet for the Quintet's live show at Scullers Jazz Club. EJ Strickland, Godwin Lewis, John Ellis, Victor Gould, and Yasushi Nakamura: these are some serious improvisers, and they take their time building solos up from silence. There's a clear aesthetic to the band, and screaming Coltrane and Brecker licks have no place in it. Instead, they started with distinct phrases and melodic seeds, leaving plenty of space for those ideas to sink in. Bit by bit, they grew outward from those seeds, variation upon variation, faster and faster, until we were enmeshed in dense thickets of sound. Lewis, in particular, is a master of this. He sings through the whole range of his alto saxophone, from the softest Bb to the tip of the altissimo, restrained until the very moment when the tension had to, just had to, burst.

For all of the incredible playing from each instrumentalist, you could tell this really is Strickland's project from the way he talked about his compositional process for each piece to the way he directed the band from behind the drums. He took his time counting them in, making sure that everyone was in complete alignment on the tempo. Most drummers would settle for one measure of clicks. With Strickland, the count in almost became part of the tune, a prelude that indicated to all of us listening where we're going with this next piece. Once the band joined, it was high quality, sophisticated jazz in the modern traditional sense—nothing avant-garde, but fresh melodies with hip harmonies played head, solo, head by some of the best in the business.

Speaking of fresh melodies, the whole set was comprised of Strickland originals, with only a few taken from his earlier releases as a bandleader, The Undying Spirit (2015) and In This Day (2009). The rest were brand new, and we were jokingly instructed to cut them all some slack for the first performance.

Standout tunes were "In This Day," a through composed ballad for soprano sax, handled ably by John Ellis, that followed a three stanza poem of Strickland's, and "Understand What I Mean," which featured Lewis and Ellis trading solos with Amir Lee, a young alto saxophonist at Berklee whose precocious licks spurred Lewis (who isn't so long out of Berklee himself) to new heights.

The walls of Scullers Jazz Club are covered in a deep blue houndstooth paper and stacked with autographed black and white photographs of the luminaries who have graced its stage. I was seated between Christian Sands and Ravi Coltrane, with Al Foster perched above my head. Good company for a show, and good company for Strickland and the Quintet, who are already superb practitioners of this music and are well on their way to the status of masters. I look forward to seeing their photos on the wall next time I come in.

Set list: When Time Passes By; Warriors for Peace; In This Day; Midnights Clearing: Eclipse of Fire; Understand What I Mean; Valid for All Mankind; Alive and Well.