By VITALIJUS GAILIUS
June 14, 2018
Sign in to view read count 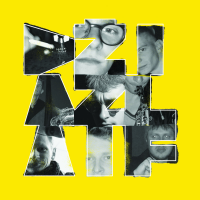 The Lithuanian jazz scene is aglow with its young generation. Džiazlaif is one of those collectives that Lithuania can be proud of. The band's name is a pronunciation of "jazz life" in Lithuanian. Behind this name stand six young, crazy and innovative guys who have been playing together for about two years and giving the local jazz scene a good shake. In that time they have won the Vilnius Jazz Young Power contest while still continuing an enviously active musical career and lashing jazz purists into a fury as well.

Stylistically, Džiazlaif's music is hardly definable. Its band members come from different backgrounds such as classical, contemporary, jazz and rock. Combining such experiences, the sextet is trying to escape well-defined stylistic frames, although the the album is based mainly upon the coexistence of jazz and rock.

The exceptional aspect, when considering Džiazlaif's self-titled debut, is its lineup. It consists of three saxophones: Kazimieras Jušinskas on soprano; Arminas Bižys on alto; and Danielius Pancerovas on baritone. And no, there is no tenor sax, the instrument much beloved by jazz adherents. These three woodwind instruments with different keys take a crucial role in the album's dramaturgy. The whole record is like a rollercoaster from pianissimo to fortissimo, and the directors of these changes are the saxophonists. They use various techniques such as growling, overtones and glissando, also demonstrating different types of tonguing such as slapping or fluttering. By the way, they really like vibrato.

However, their other colleagues should not be forgotten, especially double bassist Aurelijus Užameckis. He demonstrates an ability to play not only in a swing manner ("Ra/Fal"), but also displays impressive skills in improvisation and a predilection for the pizzicato technique rather than playing with a bow. Moreover, Užameckis is passionate about playing with the strings around the bridge of his bass, plucking them in unusual ways as well.

Drummer Ignas Kasikauskas plays more in a rock music manner rather than a jazz style. There are no exceptionally sophisticated rhythm patterns or solos on Džiazlaif's debut, but they are not necessary. This unpretentious and catchy rhythm section fits perfectly with album's concept.

Guitarist Paulius Vaškas looks like a second plan actor, but he get his fifteen minutes of fame on "Be Same Much" and "Linijos pt. 2, 3, 5," demonstrating his skill with overdriven guitar as he contributes both lines and chords. His participation makes Džiazlaif all the more attractive.

Džiazlaif's debut has eight compositions, all penned by different band members with the exception of the totally improvised "Black Out" and "Black In," which have no defined musical structures. At first glance, it looks like these two tunes serve as senseless fillers, but in general those improvised pieces are well- incorporated islands of placidity because, as a whole, the album's atmosphere is quite intense.

Džiazlaif does not trying to imitate classic fusion jazz with trivial features of funk and Latin. Those six guys are looking for new approaches, melting rock, swing, bebop and even free jazz into the cocktail called Džiazlaif. It is highly likely that the album could be too strong for jazz purists or classic rock fans, but open-minded ears may very well appreciate this record.