By GLENN ASTARITA
October 4, 2018
Sign in to view read count 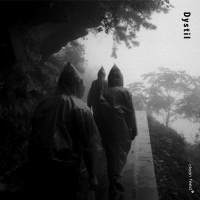 Three young and imaginative NY-based musicians execute this abstract mission with a sense of purpose. Via the press release on the Clean Feed website, "the trio Dystil propose their debut CD as an imaginary film, with the purpose to turn their dreams into realities." And while the CD clocks in at a scanty 29 ½ minutes, there's more than enough to sink your mind's eye into from start-to-finish.

All the musicians multitask by incorporating unidentified objects, which can loom as a guessing game for listeners, but that's part of the fun. However, the trio binds these off- centered works into pieces that output tangible results. The imaginary movie aspect is in full-force, as they weave background effects into airy free-jazz workouts evidenced on "One in the Age of None," where skittish movements are apt to jolt your nervous system, followed by a mellow three-way dialogue.

"2017s Containers" is constructed with Bryan Qu's drifting and spirited alto sax lines, Mark Ballyk's rolling percussion and Quincy Mayes' flourishing off-key piano voicings that provide an interesting contrast, especially when bizarre soundscapes are introduced. For the most part, the artists are in no rush to get from point A to point B. And that's a winning formula since it allows for the absorption of the inner-workings, progressions and micro-themes that are often spacious, delicate or jaggedly flowing.

And while the trio's experimental proclivities offer a great source of interest, melody-making often formulates within subtle choruses and ethereal backwashes or slowly assembled mini-motifs. Yet Ballyk goes for the gusto during his extended breakout on "Surge Toward Untruths." Shortly into the proceedings, he multitasks above Mayes' effectively placed, yet simple piano chords that act like a metronome. Here, Ballyk launches a breakneck polyrhythmic drumming escapade while also hitting small cymbals, metal objects and other implements. But the ninth act (song) in the imaginary movie is "Afterward's Horizon (If It Ever Comes)," which is a haunting ambient-minimalist tone poem, streaked with low-pitch noises that sound like an electronics device.

The brief running-time of the CD is akin to a short film that may drive your imagination into mysterious environs. So, get the popcorn ready and listen closely as your psyche delves into a modified state of consciousness.

Imaginary Film; One in the Age of None; Ink Pots; Obligatory Post-Neverdom; 2017s Containers; Dreamingmatrices; Hollowed Hope; Surge Toward Untruths; Afterward's Horizon (If It Ever Comes); Exhale_Softseq; Warm Grey Meadow.