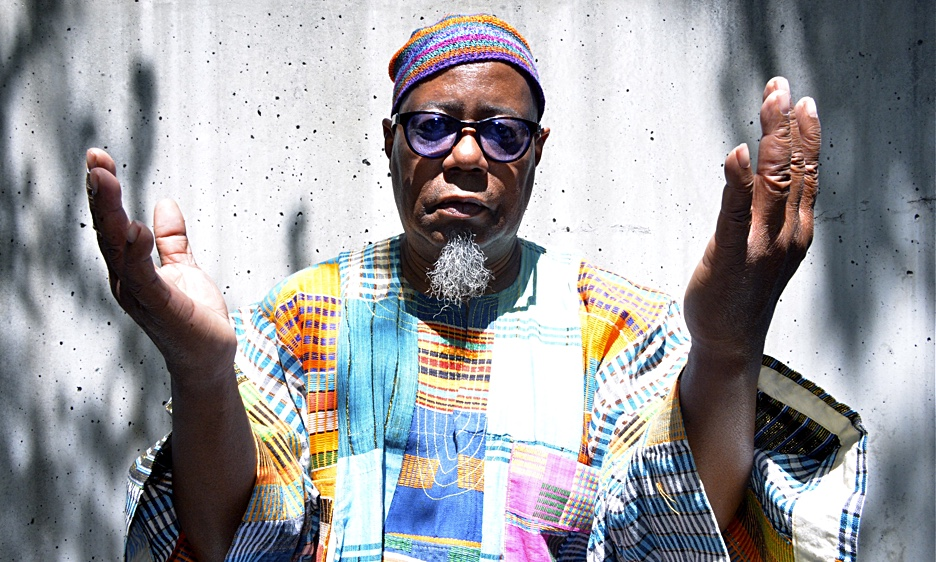 Dwight Trible inhabits a song with more than just his voice, he does so with his whole body—he uses every available limb and digit and twists and turns and shoehorns himself into his material. At Ronnie's tonight he resembled a man struggling to get into a raincoat several sizes too small in the face of a howling storm, all the while maintaining perfect pitch and clarity.

Since debuting on disc in 2001 with Horace (Elephant), named as a posthumous tribute to the pianist and community activist Horace Tapscott, who founded The Pan Afrikan Peoples Arkestra (PAPA) in Los Angeles in 1961, Trible has gone on to inherit the mantle of another spiritual-jazz auteur, the singer Leon Thomas, who emerged in the late 1960s as a member of Pharoah Sanders' band. Trible now sings with Sanders himself. He is active in the new L.A. scene centred around Kamasi Washington and is the vocal director for PAPA.

The set list for tonight's performance was built around Trible's most recent album, Mothership (Gearbox, 2019). On the disc he was accompanied by some of L.A.'s finest, including Washington. At Ronnie's, he was accompanied by an empathetic British trio comprising pianist Taz Modi, bassist Dave Whitford and drummer Jon Scott. Modi and Scott were in the band on Trible's previous album, Inspirations, recorded in London in 2017 for trumpeter Matthew Halsall's Gondwana label.

Trible performed without an interval for just over an hour. Highlights included Oscar Brown Jr.'s "Brother Where Are You," Tapscott's "Mothership" and Trible's "It's All About Love" and "Desert Fairy Princess," all from Mothership. Two others came from Inspirations: Cole Porter's "I Love Paris" and Nina Simone's "Black Is The Color Of My True Love's Hair." There were no multi-chorus instrumental solos other than Modi's trippy, impressionistic corker on "Mothership." Whitford and Scott shone on a chorus apiece on the closer, "It's All About Love," at the end of which Trible delivered a valedictory speech inspired by the sentiments on Sanders' "The Creator Has A Master Plan." Every moment tonight was spellbinding.