By C. MICHAEL BAILEY
January 29, 2015
Sign in to view read count
When Nathaniel asked Philip, "Can there any good thing come out of Nazareth?" Nathaniel could have been referring to East Oklahoma. Or, that is what many think. But Oklahoma is the home of not a few pivotal musicians. The flat terrain, constant wind, and warm sun proved quite fertile for musicians. In jazz, there is guitarist Charlie Christian, trumpeter Chet Baker, bandleader Jay McShanne, and saxophonists Don Byas, and Sharel Cassity (I asked her if she had lost her Oklahoma twang and she assured me she had, a clip on YouTube proved it). From the rock arena there is Leon Russell, JJ Cale, Carl Radle and Jesse Ed Davis. So we best tread carefully on this staid prairie musical tradition, lest we get our pansy asses beaten by some temperamental Cowpunkers.

Spontaneously combusting in Tahlequah is the Oklahoma cowpunk trio Red Eye Gravy. What is "cowpunk" you may ask? The band describes it as, "a blend of outlaw country and the punk edge of rock & roll." Hank Williams, III says this band is, ..."from the ashes of Woody Guthrie." Well, that is, if Woody Guthrie made it to the Ninth Circle of Hell and back to tell the tale. This is serious music from the same place that produced the likes of Depression-era outlaw Charles Arthur "Pretty Boy" Floyd and Twentieth-Century evangelist Oral Roberts. That is a lot to live down. 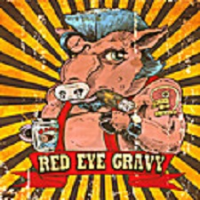 Red Eye Gravy
Red Eye Gravy
Dirty Okie Records
2008
Red Eye Gravy is a brainchild of singer/guitarist/songwriter "The Dirty Okie." The brand of music he envisioned for the band's debut recording was the great Midwest honed on the razor edge of "Legg's" lap steel guitar. That slide guitar and the lead guitar of "Shotgun Stiv" (are you starting to get it with the names>) are the tractor engines that drive the Dirty Okie's brand of Oklahoma shit-kicking music.

Western Swing, rock, country, blues, it is all here. But the mere presence of these creative musical seeds are not the sum of their parts. Red Eye Gravy brings a synergy to the styles during the mixing and making of their brand of music. This is illustrated on the opener, "Crappie Line." Drummer White Trash Jed plays a mean one-and two-step. Okie's nasal tenor and Legg's lap steel guitar brand the music from the dry and windy environs of Oklahoma.

"Crucial Paradise" sports some of Shotgun Stiv's tasty south-of-the-border lead guitar accented with sinewy lap steel. There closest thing to traditional country on this recording is the appropriately named "Country Girl." Okie's voice makes in into its lower register where it is most effective. There is nothing Nashville, Austin, or Hollywood about this music. It is dry and dirty with sweat dripped in it. Honest, sincere, genuine.

Red Eye Gravy
Dust Bowl Hangover
Dirty Okie Records
2014
Break six years into the future and the original quintet of Red Eye Gravy arrives as an augmented trio, now consisting of The Dirty Okie, playing more electric guitar, White Trash Jed on drums and percussion and Th' Coyote Bobby Ryan on the double bass. Here is a more tightly focused and better produced disc. A theme emerges in the lyrics, one that decries the plight of a lower middle class and poor in the dry Midwest. "Dustbowl/Lonely Boy" opens the disc and full of wounded pride, endurance, and perseverance.

What characterizes Dustbowl Hangover is the crack drumming of White Trash Jed. One-, two-, three-, four-step, he is the radioactive heartbeat of this band propelling these sixteen pieces through the panhandle of nowhere to somewhere special. "Hard Livin' (Comes Easy to Me)" show the band can produce the same clever Americana that the country Babylon, Nashville only longs to beget. "Poor Man's Prayer" features a searing mouth harp courtesy of Andy Wilson, who takes Little Walter Jacob's overdriven Delta sound and transfers it to the windblown high-lonesome of Oklahoma.

A molten "All that Marijuana" and a bluegrass-flavored "Oklahoma Girls" speak to the more visceral pleasures, those not denied even the most modestly apportioned. Between the two is the traditional "Ain't No Grave," a song that reminds that even the poor prevail in spite of everything, even Saturday. "Swingin' from a Rope" is a bit of Tex-Mex camp, like these Oklahoma boys made a weekend of Juarez. The closing "Hangover" bookends this collection with the opening "Dustbowl..."a take on spinning through the AM radio dial on the long I-40 drive to OKC.