Duos: When The Sum Is Greater Than Its Parts

By MARK CORROTO
March 10, 2011
Sign in to view read count
The defining characteristic of all great partnerships in cinema, from the male-bonding buddy movie to the classic Katherine Hepburn and Spencer Tracy films, is the tension created between two self-assertive characters, before their eventual collaboration. The same can be said of jazz and improvisational duos. By matching two authoritative players, sparks fly and, if the two cooperate for sympathetic ends, the session produces a worthy result. Below are a few duos of exemplary character.

Drummer Gerry Hemingway and tenor saxophonist Ellery Eskelin have already collaborated in Hemingway's quartet, releasing two fine discs for Portugal's Clean Feed Records. This, surprisingly enough, is their first duo. While Eskelin has been heard in duo with Han Bennink, on Dissonant Characters (Hatology, 1999), and more recently with Sylvie Courvoisier, on Every So Often (Prime Source, 2009), the champion of the jazz parings is Hemingway. He has made multiple recordings with Anthony Braxton, John Butcher, Marilynn Crispell, Thomas Lehn, Terence McManus (below), and Andrea Goodman.

These six lengthy improvised pieces offer up to 67 minutes of differing emotions. Between the two players the shifting sound can rocket into the stratosphere or set sail into shadowy and ruminative regions. Eskelin, although a vanguard player, always creates music grounded in congenial and agreeable terms. Where the tension is developed here is in the pair's consensus to turn up the pressure. Hemngway's brushwork opens "Deft And Bounce" and the duo slowly turns up the flame, resolving the track with a sly swing. On "Shaken And Spilt" the players poke and prod shadowy notes and overblown saxophone to create dreamy landscapes before opening the throttle into the land of rip-and-tearing energy jazz. Like Eskelin's extended saxophone technique, Hemingway can express himself beyond the sticks and pads, scraping, knocking and coaxing sounds of expression beyond the world of percussion. 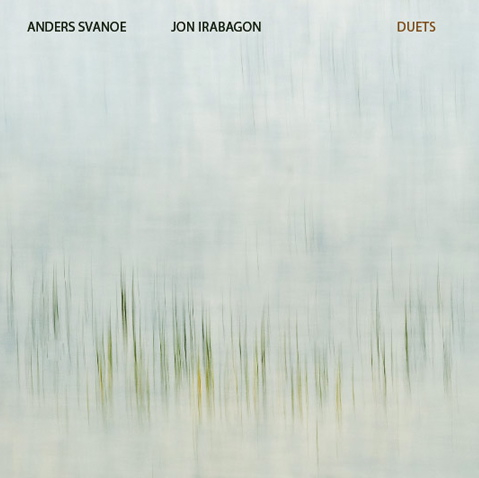 Like spontaneous poets instantly composing verse, the two saxophonists Anders Svanoe and Jon Irabagon laid down this 37-seven minutes of music in one two-hour studio session. While modern listeners think in terms of CD length discs (up to 80 minutes), this recording is more reminiscent of the warmer era of LPs. Recorded on two channels, Svanoe (left) and Irabagon (right) are captured with excellent clarity, it could easily be mistaken for an analog session (think Julius Hemphill and Roscoe Mitchell) from the late 1960s.

Svanoe is a Mitchell disciple, playing in his Transatlantic Art Ensemble, Big Band, and Note Factory. Irabagon has become a jazz shooting star. The winner of the 2008 Thelonious Monk International Saxophone Competition, he can be heard in Moppa Elliott's Mostly Other People Do The Killing, in duo with Mike Pride and Barry Altschul, or in his Sonny Rollinstribute band or Outright!

Together they compliment each other as if this were a saxophone quartet, twisting horn lines around and around each other. "Chase" opens with Svanoe playing baritone saxophone to Irabagon's tenor. The music is dodging the hunt of two sounds pursuing and in pursuit of each other. Both exhibit some extended saxophone technique on "Fuzzy-Wuzzy," dropping some well timed chirps, pops and flutter. Elsewhere, "Jump Up" begins calm enough, gently touching alto on tenor but soon intensifies into an almost orgasmic climax, only to be resolved with some settled breaths. Phew.

The meeting of two musicians, both innovative composers and passionate organizers, for an album of improvisation, yields something incapable of being classified as either free jazz or, for that matter, composed music. Kaleidoscope & Collage finds bassist Stephan Crump and saxophonist Steve Lehman presenting two lengthy meditations on sound that don't want for ideas, crisp musicianship or locomotion.

These two tracks were recorded over the course of five sessions, then collaged together by Crump to create a cogent and consistent document. The pair trade off the time keeping duties throughout with one player maintaining a pulse for the other to extemporize over. Crump can coax a walking bass line, tap a rhythm, or send bowed energy towards Lehman. For his part, the saxophonist favors both sharp and biting notes and, also, repeated pulses that can carry the momentum forward. By cutting and pasting these sessions together, the disc never meanders or loiters.

This one track, just short of 34 minutes, is a filling and fulfilling collaboration by two like minded artists. British saxophonist Lol Coxhill and Italian guitarist Enzo Rocco recorded this very intimate live date at the All Frontiers Festival in 2008 in Gradisca D'Isonzo, Italy. Rocco, a frequent collaborator with Carlo Actis Dato, is both an inside and outside player. Like Coxhill, he can fly with the freest of jazzmen or handle precise charts. Together, the two recorded London Gigs (Prominence, 2000) with John Edwards, Steve Noble and Veryan Weston.

Here the players are never at a loss for momentum. Coxhill, the master of extended technique, carefully budgets the expenditure of his sounds, displaying his virtuosity without extravagance. Alongside Rocco, the saxophonist mirrors the guitarist's good humor. Rocco holds his notes close to his chest, shifting from quick flares and lingering intimacies. With sounds rebounding off each other, the duo rarely clashes, instead preferring to finish each other's sentence. The recording feels more like a familiar conversation than a live concert.

Below The Surface Of

Every player's perfect partner, Gerry Hemingway (see above), spotlights guitarist Terrence McManus, one the members of his latest quintet. Below The Surface Of consists of one hour of music over seven tracks. McManus is one of New York's latest guitar heroes, working in groups led by Herb Robertson, Kermit Driscoll, Ellery Eskelin and Tim Berne. He is adept at multiple styles, intensities and volumes.

This one day session fashions multiple perspectives and techniques. The title piece acts as a tsunami of sound, Hemingway choosing to muscle his way into the song, as McManus tears chunk after chunk of notes, employing electronics to present part of his guitar heard backwards. That aggression is balanced by the haunting "The Glass Lake," where cymbals are the accompaniment to harp-like plucked notes. The purpose here seems to be a showcase for the differing faucets of McManus' sound. He can pull some noisy abrasive scraping sounds heard on "The Dry Land," and hover above Hemingway's solid pulse on "the Night ocean" with an exquisite etherealness of attack and some simple and graceful notes.

Applying laser to Minaret Minuets (or playing the download), from electric guitarist Scott Fields and tenor saxophonist Matthias Schubert, recalls the early days of mono-into-stereo recordings. Back then you might hear the saxophonist coming from just one speaker. Where you sat in relation to your hi-fi set up was paramount. By unplugging one channel you would be able to create your own solo session. With Fields and Schubert, both strong soloists, you might be tempted to do the same, but, alas, modern engineers blend the channels for balanced listening.

Fields, an American free jazz player from 1960s' Chicago, has transformed into a complex thinker and organizer of structured and intricate group interactions and improvisations. He moved to Germany a few years back and began working in Schubert's jazz orchestra. The two have also collaborated on Fields' ensemble recording, Beckett (Clean Feed, 2007), with John Hollenbeck and Scott Roller.

What stands out here is the multiple simple gestures made by each musician. Be it a saxophone's flutter and breath or a guitar's string of notes, each produces sounds that seem to shimmer or glow before dwindling away. The pair apply more space than might be expected. Is it in deference to the other? Perhaps. Maybe that is why the ear is drawn to a single speaker. Focusing on just one player would cause you to ignore the superb interaction of forces here.

This duo recording by two Americans in Switzerland has the same feel as the Loren Mazzacane Connors and Jim O'Rourke 1997 recording Are You Going to Stop... in Bern? (Hatology, 2010). While this session is by two percussionists and the Connors and O'Rourke disc is by two guitarists, both have an uncomplaining delicacy about them.

Z'EV, a legend of industrial and noise percussion sound and performance arts, journeyed to Zürich to perform two nights with New York-born resident of Switzerland Jason Kahn. Kahn, a percussionist, has released multiple discs and of special note are two he made with John Mueller, Paper Cuts (Crouton, 2004) and Topography (Table Of Elements, 2008).

Here the two assent to a strictly minimalist approach with parsed beats and odd scrapings. Kahn adds pits of analog synthesizer electronics as a wash over the landscape the two are creating. The sounds are more atmospheric than vibe, more mental than visual. Perhaps better as a recording than as an in-person experience.

Master bassist and improviser William Parker has anointed many a free jazz artist in his 40 years in the business. From his work with Matthew Shipp, Charles Gayle and Joe Morris, he has shaped the direction of much American creative music. When he chooses to record with a new(ish) name, it is a reason to take note. Italian-born, New York resident Ninni Morgia has been gaining attention lately in the noise-rock band White Tornado and free jazz bands Death Pool, psychedelic outfit La Otracina, and jazz trio The Right Moves with Kevin Shea and Peter Evans.

Prism is a double LP (or digital download) release, featuring 15 shortish improvisations between the bassist and Morgia. While Morgia sticks to his distinct guitar sounds, Parker, on several tracks, switches to a slide whistle or gralle, a Spanish reed instrument. Ninni's guitar tends to sound like a 1960s' space computer with its human voiced pitches and electronic melodies. The playing remains quite open ended, Parker creating energy fields which Morgia can improvise over. He favors a Derek Bailey-like mixture of scattered notes and freneticism. The tempos shift song to song, never becoming redundant. The pair make a strong statement.

Tracks: Motion And Thought; Stillness And Flow; Sustain And Footwork; Deft And Bounce; Shaken And Spilt; Stars And Treetops.

Below The Surface Of

Tracks: The Night Ocean; The Constants; The Glass Lake; The Rush To Get There; The Dry Land; The Disturbance; The Amber Field.