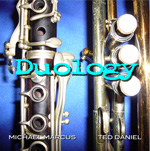 Duology is an extremely interesting album that shows how much musical communication depends upon the players and not the instrumentation. Michael Marcus, who plays all manner of reed instruments, sticks to Bb clarinet here, while Ted Daniel plays four members of the trumpet family, including something called a Moroccan bugle.

The lack of a rhythm section and chordal instrument actually expands the possibilities of interaction between Marcus and Daniel. Once the starkness of the musical setting is accepted, what has been created can be appreciated as quite remarkable. Saxophonist Frank Lowe introduced the two men to each other twenty years ago and their familiarity shows.

Of the thirteen tracks, six are listed as Marcus compositions, three by Daniel with the remaining four dually listed, which might mean free improvisations. Stylistically, the tracks range from having a New Orleans feel, through bebop-ish lines to avant-garde sonic constructions.

What will be immediately obvious even to the listener who looks for more overt structure, is that Marcus and Daniel listen to each other closely and hence produce a sound that is less two lines of differing timbres intertwining than a merging of the woody reed and brass sounds into something that is both and neither simultaneously.

ADVERTISEMENT
There are actual recognizable tune structures ("Knock Knock," "Sonic Corridors," "O.C.," Module," "Lunar Shuffle" and "Sweet 'N' Lowe") which provide foundations for the improvisations that follow. The free improvisations ("Dark Sun," "Wiggle Room," "Human Factor" and "Rhythm In Green") hold together very well, primarily due to the intense familiarity that Daniel and Marcus bring to the task at hand.

The two solo tracks, "Pagan Spain" from Daniel and "Cotton Candy" from Marcus are almost refreshing and show how a skillful musician can create structure and maintain interest while using the barest of materials. "Spiral Landscapes" falls in between the labels of structure and free, having a contrapuntally tonal feel that contrasts with the free rhythms.

Duology shares much with Organic Resonance (Pi Recordings, 2003), by Wada Leo Smith and Anthony Braxton, besides instrumentation. Both might take some open ears and time to "get inside of," but both can be very rewarding.