Duology + 2 at the London Jazz Festival 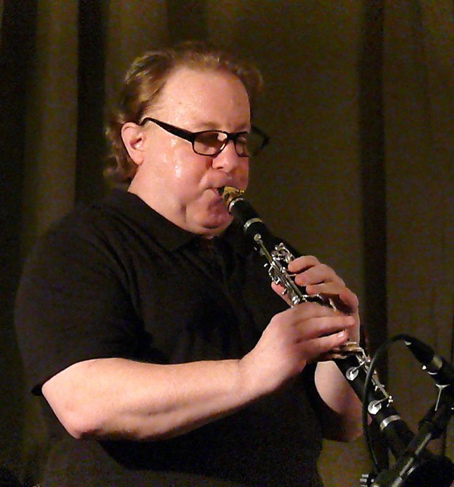 Marcus made his debut with the blues bands of Albert King and Bobby Blue Bland, before becoming a prominent figure in the free jazz scene from the 1980s onward with the likes of Sonny Simmons, Frank Lowe, Jemeel Moondoc and Denis Charles. Probably his most high profile gig is fronting the Cosmosamatics with Simmons; the band has a string of recommended releases under its belt. Although Marcus has played alto, soprano and baritone saxophone as well as several more unusual members of the saxophone family, he currently concentrates solely on the Bb clarinet.

Daniel began his career with a childhood friend, guitarist Sonny Sharrock, becoming very active during the 1970s loft jazz era in New York City. He subsequently recorded with Archie Shepp, Dewey Redman, Andrew Cyrille and Sam Rivers. In recent years, Daniel has been featured in several of violinist Billy Bang's ensembles, and Daniel appeared with him at the 2009 Vision Festival. Although there are few current releases under his leadership, Daniels has overseen the reissue of many of his 1970s recordings, such as the The Loft Years, Vol. 1 (Ujamaa, 2009) and Tapestry (Porter Records, 2008).

Marcus first got together with Daniel when the trumpeter hired him for his Energy band in 1983, and they have worked together on and off ever since. Their Duology ensemble was formed in 2006, and they currently have two releases to their name in Duology (Boxholder, 2007) and Golden Atoms (Soulnote, 2008). For this five-date tour of England, the basic duo was extended with Charlie Collins on drums and John Jasnoch on electric guitar (who replaced the bassist). Marcus and Daniel linked up with this Sheffield-based twosome on the recommendation of Sonny Simmons, who has worked with Collins before and has become a personal friend of the drummer.

Daniel opened the first set with an almost ritual spraying of buzzing resonance around the room by means of a Moroccan bugle, which looked like a miniature Alpine horn. Inauguration complete, there was a brief pause before Collins set up a rumbling pulse accompanied by Jasnoch's spiky chords, until they too paused, at which point the horns joined in a tight unison. It quickly became apparent how aptly the group was named. Unison gave way to counterpoint and then to a practiced interweaving of lines in which Daniel's tart trumpet sashayed around Marcus' full-toned clarinet. This dashing horn interplay proved one of the defining characteristics of the group.

During the course of two sets totaling 99 minutes, Marcus showed himself to be a fluent improviser, smoothly shifting between registers on his clarinet from the very top to bottom of his horn. While he was adept at dissonant sparring (unsurprisingly, given his back story), a bluesy edge was never far away and was sometimes suitably explicit as on "Qusim," which was written for the late Gigi Gryce. On the opening number, "Knock Knock," Marcus charted a mesmerizing course, including a passage of piercing cries followed by a series of staccato yelps, with just Collins' dancing pulse to accompany him.

Daniel, on flugelhorn as well as trumpet, was Marcus' equal in the trumpeter's ability to shift in and out of both time and tune. His laconic style incorporated fanfares, blurts, half-valve distortions and chirrups into a mellow buzz. Though at times he airily drifted on the insistent rhythmic current, he nonetheless reserved the option to up his velocity to whitewater strength, often locking into the same turbulent cadence as Collins' drums.

Jasnoch and Collins were largely confined to supporting status, but carried it off with a wide ranging freedom and without recourse to charts. As well as playing the anchoring bass role, Jasnoch also provided ongoing commentary and a restless backdrop. His spare chording and sometimes splintered lines hit the perfect balance between buoyant backing and getting in the way or closing down options for the horns.

Collins favored a basic kit, but exploited it fully, spicing his probing polyrhythmic rumble with great attention to texture, which is testament to a strong improv background. He very deliberately struck different parts of his cymbals, with hands poised to dampen the sound, to achieve the effect he wanted. Elsewhere he pressed one stick against the drum head and struck it with the other for a nuanced thwack. Later he placed a cymbal on a drum head for additional chance reverberations, in further evidence of his careful manipulation of sound.

Even though they were already four-gigs deep in the tour, there was still an air of spontaneity. Little appeared pre-planned, not even the sequence of tunes or who should take the first solo. Occasionally one or the other would orchestrate the backing with indications for more or less volume or to lay out, but generally these arrangements seemed worked out as they went along. This was exemplified by Marcus' instruction to Daniel to "just do your thing." 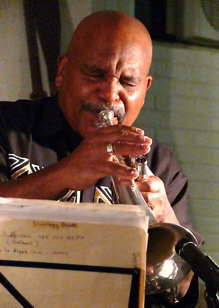 One of the high points of the first set was Marcus' "Sweet 'n' Lowe," which was dedicated to his former partner, the late saxophonist Frank Lowe. The tune was a gentle ballad outlined by brushes and muted trumpet with sweet but slippery interplay, finishing appropriately on a joint low note.

As often happens, energy levels seemed higher in the second set when the musicians really cut loose. First up was "Sonic Corridors" founded upon an involved unison then a chase boasting intervallic leaps, reminiscent of Eric Dolphy. The tune drew a great solo from Daniel full of rapid-fire fanfares, followed by a choppy Marcus spot over roiling drums and slow guitar chording. This was also where the backing duo got their one chance in the spotlight. Jasnoch stepped out first with an oblique guitar solo over drums so hyperactive Collins could almost have been soloing too. But a custom made drum outing was to follow, with Collins initially holding a tambourine in one hand over the drum heads to attenuate sound. Tumbling, elemental, drum rolls served to bring back horns for a closing, with Collins scraping a stick across his cymbals for another distinctive texture.

"In That," introduced by Marcus as "our latest piece written on your trains," featured a taut theme, followed by a swinging section of spirited horn interplay, with trumpet and clarinet moving in and out of synch in competing bursts, eliciting a fiery trumpet foray from Daniel before a closing duet. It wasn't all power play. Daniels "Spiral Landscapes," posited Death Valley National Monument as a less threatening place than might be imagined through a bucolic horn duet over sparse backing, before Marcus' clarinet swept through like arid wind.

Each set ended with a playful rendition of the band's theme tune: the late Dewey Redman's "Dewology." While the musicians' brief duet version at the close of the first set felt a bit of an afterthought, they really went for it to round off the second set. The cartoonish theme gave way to sparkling interplay over roiling percussion, before a raucous whole group free improv section erupted. Daniel and Marcus turned to look at each other and cued a final restatement of the theme, with a Howdy Doody time feel. It was a neat gambit to end a very satisfying performance and a great festival opener.