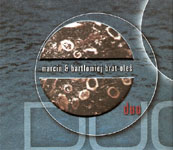 The unexpected should be expected at the very visual that heralds the package of Duo by the twin brothers, Marcin Oles (bass) and Bartlomeij Brat Oles (drums). It suggests complete and utter deconstruction—from destruction to reconstruction—in the strongest possible way. The prospect of rippling water, suggesting the infinite, together with the circles within circles harking to the finite, suggests a musical experience like none ever before. And if this sounds like the advent of something revolutionary, that is because it is—not quite the invention of bebop, but certainly close.

There are at least two things that are so new and exhilarating about Duo. First, this is an unabashed attempt to explore the unfettered depths of tone and color, and the dynamics of rhythm, as well as a masterful attempt to unlock the mysteries of harmonics and chord changes—from instruments that appear to be set free of their finite constructs as they are manipulated into a sonic realm so difficult to imagine it is almost like science fiction. "Three Chords" and "Mortone" are outstanding examples. The starting point for both tracks is to begin with a simple linear structure and then create the most complex and intricate progressions around each. In the former, three chords, and their tonic mathematical finality have been deconstructed and the resultant music is born of pure improvised exultation. "Mortone" is a kind of compositional soul mate as it takes sheer tone from the resonance of the wood and veneer of the bass and applies the vibrations of the strings to shatter all rational impressions of logical sound.

Even in sketches such as "Lukacs," a reverent tribute to Georg Lukacs (one of the 20th Century's greatest Marxist philosophers and literary figures), or the improvised narrative describing "Skrik" (Scream) (the painting by the great Norwegian expressionist painter, Edvard Munch), bass and drums collide soulfully as grumble and growl, wail and howl intertwine gracefully with the rapid ric-a-tic-a-tic and the splashes of cymbals as the musicians work their way through almost through-improvised pieces. Although the music for this duo slants somewhat towards Marcin Oles' bass in "Afrik," the tide turns somewhat. Here Bartlomeij Brat Oles breathes life into his variously fixed-tuned percussion array, creating a visually entrancing and life-like canvas that is breathtakingly African—complete with the sound from dawn and the roar to a quieting down at dusk, where the cicadas rule the darkening landscape. And there are five other tracks that are also guaranteed to surprise in more ways than one.

And so, here is the second new and spectacular aspect this record: It treads softly across the expanse of improvised and composed music. It takes apart tonal values that occupy the realm of pure sound; it shatters the mathematics of rhythm and creates a moveable feast of music that evolves as it goes along, every time it is heard. And that's real jazz.