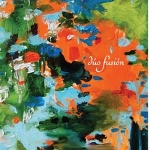 The best music sometimes comes in the smallest packages. Take, for instance, Duo Fusion, the team of flautist Sarah Swersey and guitarist Joe Belmont. Swersey is classically trained, and has sat as principle flautist for several orchestras. Belmont has played guitar in a variety of genre over several different projects, and possesses considerable jazz chops. The two come together in an ambitious quest to conquer all music types on their duet recording, Duo Fusion. The duo addresses tango (Astor Piazzolla's "Bordel 1900"), classical (or baroque, with the opening of Bach's "Brandenburg Concerto No. 5"), Broadway (Rodgers and Hammerstein's "My Favorite Things"), and, of interest here, jazz in Miles Davis's and/or Bill Evans' "Nardis."

The paternity of this jazz standard is a bit murky. Miles Davis told that Bill Evans composed it and Evans claimed Davis wrote it. Credited most often to Davis but performed many more times on record by Evans, "Nardis" exists as fabulous love child of these two profound musical Words. Duo Fusion takes what was imagined as a water color, sharpening it into a clear digital focus with Swersey's tart flute, while retaining the pastels with Belmont's thoughtful voice. The effect is a very clear picture of what both Evans and Davis intended.