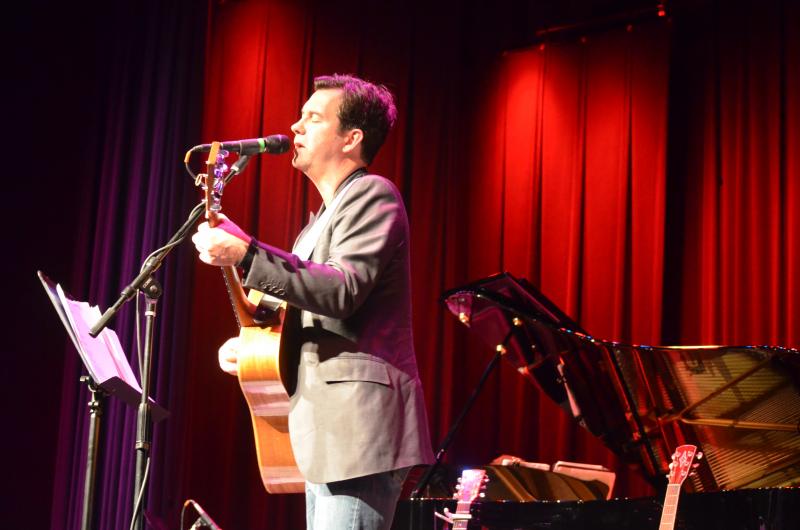 By CHRISTINE CONNALLON
December 24, 2011
Sign in to view read count
Duncan Sheik
Boulton Center for the Performing Arts
Bayshore, NY
December 9, 2011
Selecting "Stripped" to kick off the show at the Boulton Center for the Performing Arts on Long Island, NY seemed appropriate on many levels. Duncan Sheik stood center stage in the cozy, 260-seat venue, flanked by a semi-circle of five acoustic guitars and a keyboardist at a stately piano slightly behind him. Not an elaborate electric set, this was an intimate, stripped-down performance without elaborate lights, lasers or enhanced effects. The Depeche Mode song he opened with appears on his Covers 80's (Sneaky Records, 2011), along with his own unplugged versions of songs that he grew up with and enjoyed, like The Cures "Kyoto Song," The Smiths' "William, It Was Really Nothing" and Talk Talk's "Life's What You Make It." Physically, Sheik was lean, clean-shaven, and openly joyful as he strummed his various guitars. Fresh from a stint in rehab for alcohol addiction earlier this year that coincided with the actual day of the release of Covers 80's, Sheik was forced to cancel a planned tour in venues larger than this scaled-back Northeast December mini-tour.
"You are the coolest people in the middle of Long Island...clearly," Sheik quipped, sporting shorter dark hair and appearing similar to the Sheik of 1996, when his pop career took flight on the wings of the Grammy-nominated smash hit "Barely Breathing." In a black cotton v-neck shirt under a gray blazer atop medium wash jeans that crinkled just so behind the knee and tan leather oxfords, Sheik's eager expression gave him a much younger appearance than his 42 chronological years would suggest. He launched into the older "Memento," and hit his stride during the popular "She Runs Away."
"I wrote that song 900 years ago," he said, referencing his early hit, and apologized for any lyric flubs. It was clear that the audience didn't mind, randomly offering suggestions of songs they would like to hear, which lead to banter between the artist and his fans.

Even technical issues didn't put a damper on things, probably because of Sheik's Zen-like Buddhist spirit. "My guitar was behaving really well during sound check," he assured, even asking the audience if the crackling noise he experienced with one guitar in particular was bothering anyone. Before he broke into a cover of Tears For Fear's "Shout," he negotiated with the crowd," If you sing along with the song, the noise will go away. It's just a suggestion." "Shout" showcased his talent to the fullest, as he closed his eyes and belted out lyrics like "these are the things I can do without."

With deadpan wit drawing laughs from the crowd, as well as one insistent fan who seemed determined to have his request for "Freebird" played, Sheik seemed to go with the flow, even explaining to the insistent requester that he didn't have the words to express how messed up that request is in this context, but admitted with a laugh, "it's so bad, it's good."

Snafus didn't appear to upset him in the least, as Sheik engaged a sound tech who came out, offering an alternate cable for the problematic guitar. "I don't think it's the cable. The cable is black and purple. It's new. No, it's the guitar that sucks."

Before breaking into "I Don't Do Sadness" from the Broadway hit show Spring Awakening that he created with Steven Sater, and which earned him multiple Tony awards, Sheik explained, "I'm a delicate flower. I write music for the stage." He followed up with a song from Whisper House (RCA, 2009), which also had a theatrical component. As audience members lobbed their favorite Whisper House songs at him, Sheik simply said, "No, not that one," until going into "I Don't Believe In You." In self-deprecating fashion, he promised no more guitar solos, saying "Don't tempt me" and cracking jokes about the extreme duration of Grateful Dead guitar solos, especially as he discovered their channel on Sirius satellite radio and jokingly timed some of them.

"My set list is a disaster right now," Sheik grinned sheepishly as flurries of lyric sheets cascaded down from an old school music stand in front of him. "It's been a disaster of lyric sheets. It's incredible, it's amazing...I'm so organized," he commented as he made an attempt to put together some small stacks of white sheets on the floor, all the while endearing himself to the crowd. When asked why he didn't use an iPad for lyrics, Sheik said that he had in the past but laughed that scrolling through it was "pretentious and horrible" so paper is the way he's doing it.

Sheik launched into the romantic "For You" and, again, the feelings were nearly raw as he sang "Once again, I am open." Sheik swayed, closed his eyes often and walked between the center of the stage and the piano. He was home, in his element and the joy on his face was apparent. 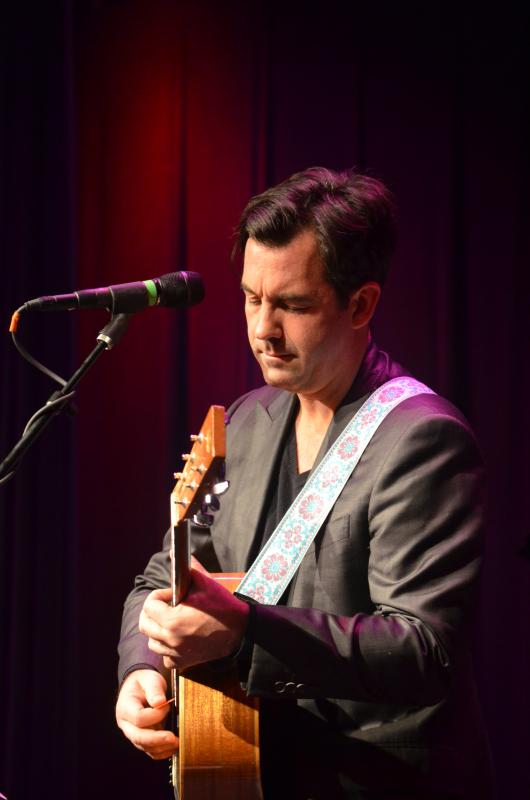 When a fan shouted out for "Such Reveries" Sheik said "I was going to play it anyway, but I'll play it now. That makes it seem like I'm taking requests," smirking amid wild applause. When a request was made for the harder-driving beat of "The End of Outside," he had to give his keyboardist a quick tutorial, but commented "You're lucky you're requesting songs I can actually play."

Before launching into "Barely Breathing," much to the happiness of the crowd, he recounted, "I'm tuning (this guitar) because I care about you." When he asked if he could play "new new songs that nobody has heard, " Sheik played a song called "Lay Down Your Guns" and proclaimed, "It's not 'Freebird,' but it is southern rock."

A highlight of the show was his scaled down version of Radiohead's "Fake Plastic Trees," which created an occasion to hold notes for long past needed, as well as bringing his vocals to a near whisper, which enraptured the audience into silence until the burst of applause at the end. Sheik literally belted notes to the ceiling and commanded the attention of all in the room.

Encores included his classic "Half-Life"—another request—as well as one off the latest CD. "Do you guys like the Psychedelic Furs?" he asked. "You may have to sing along," he noted, as he searched for the lyric sheet for "The Ghost in You."

Sheik didn't have to ask twice. He had the audience from the first notes of "Stripped."