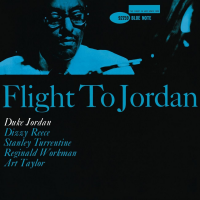 If this isn't a perfect hard bop record, it comes awfully close. And coming from an artist who is virtually forgotten, it's all the sweeter.

Duke Jordan was an A-list pianist who was there at the birth of bebop. He was part of Charlie Parker's classic quintet in 1947. So why don't we know his name the way we know Thelonious Monk's or Bud Powell's?

My guess is Jordan just didn't have the personality to be a headliner. But that's just a guess, and it's based partly on this wonderful 1960 album—his only one as a leader for Blue Note.

On Flight to Jordan, the pianist shines in three ways.

First and foremost, Jordan is a magnificent composer. He wrote all six tunes on the original album, plus one of the two CD bonus tracks. All are spot on. There are four hard bop workouts that stand up to any The Jazz Messengers track of the era. There is also one achingly beautiful ballad, one magnificent slow, draggy blues and one standard. For the writing alone, Jordan earns my admiration.

Second, he's clearly a terrific leader. How do I know? He lets the two horns—tenor Stanley Turrentine and trumpeter Dizzy Reece—steal the spotlight on almost every tune. They are a formidable front line. If you didn't know it was Jordan's album, you'd think it was a hornman leading the crew. They are that dominant. Jordan must have had supreme confidence in his own ego to arrange the tunes like that.

Finally, Jordan is a fine pianist—nimble and melodic. I particularly love his soft, bluesy lines on "Deacon Joe," his exquisite solo on the ballad "Star Brite" and the gentleness of the closing piano trio on "I Should Care." Yes, it's a bop record, but it's the slow stuff that really separates Flight to Jordan from standard Blue Note fare.

I first discovered Jordan as a sideman on Tina Brooks' True Blue, recorded for Blue Note just a few weeks earlier in 1960. And now that I've fallen in love with Flight to Jordan, I plan to check out some more Dizzy Reece.

That's what I love best about my Blue Note obsession. One terrific record leads to another. My jazz education continues.