By JOHN EYLES
October 6, 2015
Sign in to view read count
This article was first published in 2005.

Building a jazz library? Then you'll definitely need some Duke Ellington as a cornerstone of it. The Duke is frequently cited as the greatest jazz man of them all, with his main rivals for the crown being Louis Armstrong, Charlie Parker and Miles Davis.

Ask ten Ellington fans to list their ten favourite Ellington albums and the chances are you'll end up with at least 60 albums to choose from. There is just so much Ellington available (a recent search of Amazon.com gave me over a thousand choices) -and so much of it is good.

OK, where should you start with Ellington if you are building a collection? The truthful answer is "just about anywhere." But if you want more guidance than that, then these selections (listed chronologically) will deliver. They are not necessarily "the best" (whatever that means), but they will not disappoint; they give a taste of different periods and aspects of Duke, and they feature all of his greatest sidemen, including Cootie Williams, "Tricky Sam" Nanton, Johnny Hodges, Barney Bigard, Harry Carney, Jimmy Blanton, Ben Webster, Cat Anderson, Clark Terry, Paul Gonsalves...as well as the Duke himself.

Two words of warning: Firstly, try not to be put off by the shoddy packaging of some of these releases; in no way does it reflect the quality of the music. Nonetheless, shame on you Bluebird, Storyville et al. Secondly, if you possibly can, listen to recordings of early Ellington before purchase (over Amazon, if not live.) Some people don't like too much crackle, hiss etc. But what is "too much"? It's a personal thing, very difficult to communicate in writing. I find no problem with the sound of any of these, but if you call yourself an audiophile the best solution is to listen.

One final warning: Ellington is addictive! If you get hooked, this list is only the very beginning... 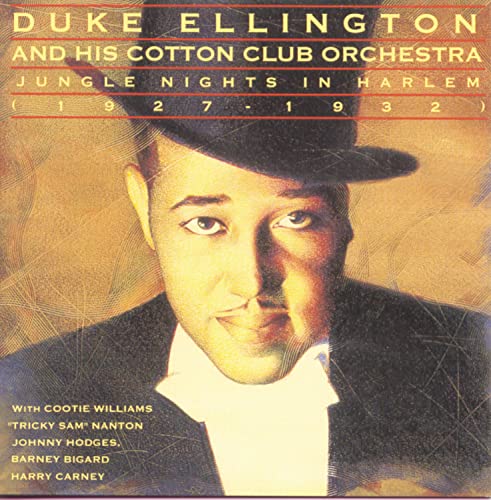 Jungle Nights in Harlem (Bluebird)
There are many releases documenting Ellington from the late 20's, when his orchestra first came to prominence at The Cotton Club. Taken together, the trio of RCA (Bluebird) albums, Early Ellington, Jungle Nights in Harlem and Jubilee Stomp are as good as any. They have great sound, and their immediacy conveys how revolutionary, strange and joyous Ellington's music must have sounded back then. Trumpeter Bubber Miley and trombonist "Tricky Sam" Nanton's use of plunger mutes for vocal effects did much to define the early sound. The extraordinary "Creole Love Call," with wordless vocals by Adelaide Hall, sounds like a message from beyond. 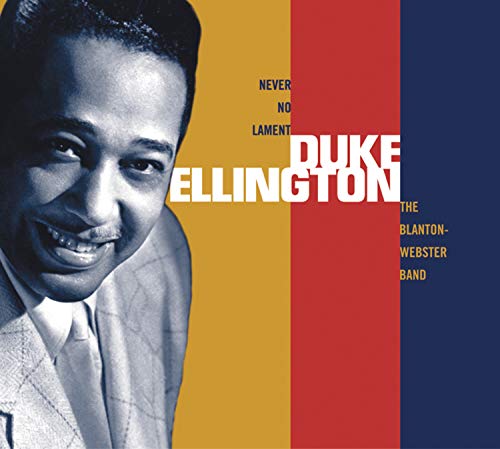 Never No Lament (Bluebird)
Utterly essential; the number one choice from this list. Ellington's early 40's band with Jimmy Blanton on bass and Ben Webster on tenor sax lifted his music up a level, and gave us such timeless pieces as "Ko Ko" and "Jack the Bear." Even more significant than the arrival of Blanton and Webster was that of arranger and composer Billy Strayhorn, who remained with Ellington for the rest of his life. Strayhorn was responsible for composing and arranging such classics as "Chelsea Bridge" and "Take the 'A' Train." The remastered sound of this release is excellent. As an addition (not an alternative), consider The Duke at Fargo, 1940 (Storyville), a live concert recording by this band, more atmospheric but less polished. 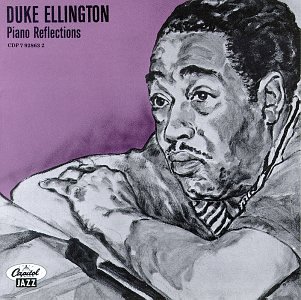 Piano Reflections (Blue Note)
Because of his pre-eminence as a composer, arranger and leader, Duke was always underrated as a pianist. He was reluctant to put himself in the spotlight and never indulged in prolonged soloing or showmanship (rather like his stage announcements to audiences, in fact). But his economic style is highly distinctive and atmospheric.
As alternatives or additions, try Piano in the Foreground (Sony) or Money Jungle (Blue Note). The latter is a remarkable 1962 trio session with Charles Mingus (whose own music was heavily influenced by The Duke) and Max Roach. Along with Ellington's session with the John Coltrane quartet in the same year, it led to re-evaluation of Ellington by modernists. 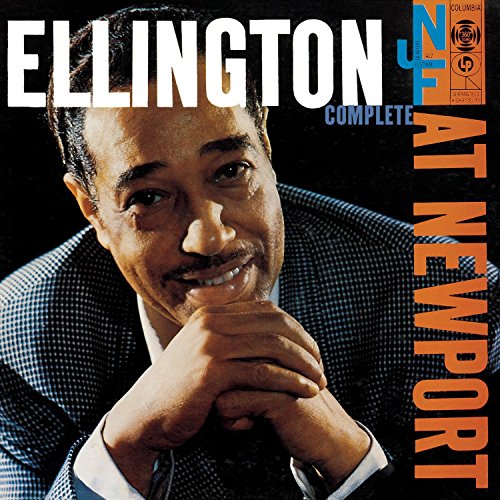 Ellington at Newport 1956 (Complete) (Sony)
The Orchestra's appearance at the 1956 Newport festival has become the stuff of legend and folklore. It is one of the most celebrated live recordings ever, centred around a thrilling extended solo by tenorist Paul Gonsalves. It revitalised Ellington's career, which had hit a prolonged plateau, and acted as a springboard for his later years. The latest two disc release gives a full picture of the event (with less emphasis on Gonsalves), adding new material and much improved sound. 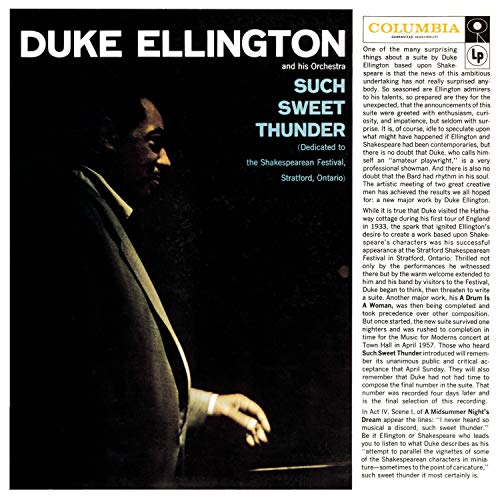 Such Sweet Thunder (Sony)
A selection of Ellington's suites is essential to any proper sampling of his music. As early as 1928 in the Cotton Club he was putting together pieces that went beyond the boundaries of the short song form. In the mid 40's, "Black, Brown & Beige" was a full length suite that was never properly recorded (although the 1958 version with Mahalia Jackson is well worth investigating). Typically, Such Sweet Thunder, inspired by Shakespeare, contains small melodic pieces that stand up on their own as tunes, as well as being part of the greater whole. 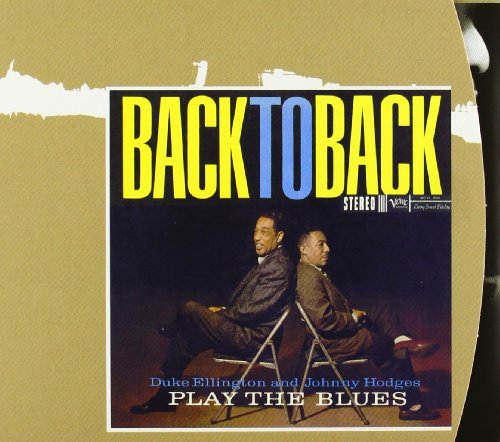 Back to Back (Verve)
Altoist Johnny Hodges was one of Duke's longest serving band members, in almost unbroken service from 1928 to his death in 1970. Few words are needed to enhance this album's subtitle -"Duke Ellington and Johnny Hodges PLAY THE BLUES." A small group session that features Duke's piano as much as Hodges, it has a charming, loose, after-hours feel. The group is completed by Harry "Sweets" Edison on trumpet, guitarist Les Spann, Al Hall or Sam Jones on bass and drummer Jo Jones. Almost as good is the companion album Side by Side (Verve) which has less of the Duke but does include Ben Webster and Billy Strayhorn. 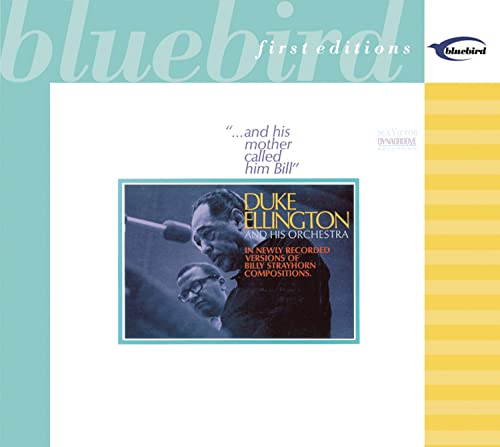 ...and his mother called him Bill (Bluebird)
Billy Strayhorn's compositions and arrangements were as vital to the success of the Ellington Orchestra as the Duke himself was. Arguably, Ellington was never as good again after Strayhorn's death in 1967. This tribute has a suitably mournful quality, capturing the beautiful melancholy so typical of Strayhorn's work. Tracks titles such as "U.M.M.G." (short for Upper Manhattan Medical Group) and "Blood Count," are reminders of Strayhorn's prolonged terminal illness. 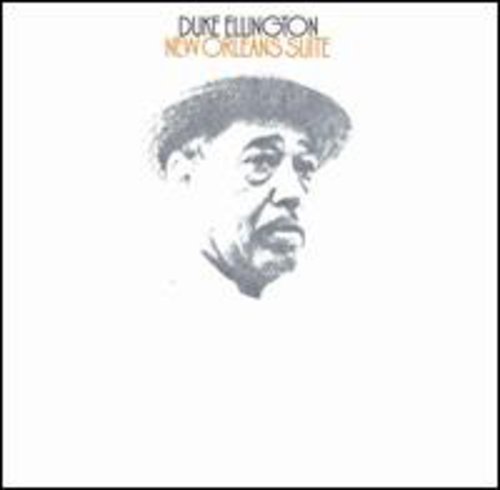 New Orleans Suite (Atlantic)
Commissioned by George Wein for performance at the 1970 New Orleans Jazz Festival, this is the best of Ellington's later suites. It successfully captures key elements of the city's music. Recorded on April 27th and May 13th, Johnny Hodges is absent from the second session. He died on May 11th.
For alternatives or additions, try Far East Suite (Bluebird) or Afro Eurasian Reflections (OJC), the latter being Ellington's last truly great recording. 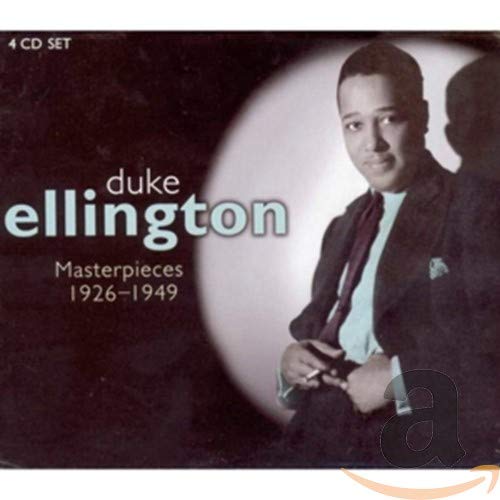 Masterpieces: 1926-1949 (Proper)
Finally, just a quick word to any absolute beginners. It is possible to buy compilations of Ellington's early period (through to the late 40's) very cheaply, and they are fantastic value, a great way to sample Ellington without spending too much. Try this 4 CD box set or The Centenary Collection (Pulse) with 100 tracks over 4 CD's. At the other end of the spectrum, obsessives can currently pick up a 40 CD German box set of everything Duke recorded between 1924 and 1947, The Duke: Edward Kennedy Ellington and His Orchestra (History) for about $50, if they shop around. Now that's a bargain!