By JIM SANTELLA
February 1, 2002
Sign in to view read count 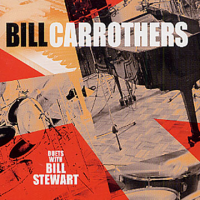 Recorded three years ago, released on the Birdology label, and reissued now by Dreyfus, this duo session brings together two veterans who share a desire to create unique music every time out. Bill Carrothers is 37. Bill Stewart is 35. They're at a point in their careers where creativity and tradition have been united by a desire to move the music forward. Hence, familiar melodies and consonant harmonies are woven into impressions of the world around us. Dreamy afternoons coexist with spurts of charged lightning. Civil War memories sit side by side with some of Monk's best. Both artists explore a large array of textures and timbres. The pianist's hands control string vibrations, as the drummer's hands dampen his set. A standard, swinging arrangement of "Taking a Chance on Love" soon develops into conversant fours that move further and further toward the edge. With a return to the song's head melody, the duo proves that modern jazz needn't go past that point. No screaming or squawking here: just sincere creations that invoke a sense of adventure. "Puttin' on the Ritz" swings with a driving intensity that brings both artists around full force. No coffee required. "A Nightingale Sang in Berkeley Square" settles down with subtle passion and subdued nighttime impressions. Their "Death of a Cigarette" rounds out the session with a heapin' helping of the blues. Two trailblazers in the jazz world, Bill Carrothers and Bill Stewart continue to shape today's worldwide approach to the music we love.

How many ya got?

Drum Prelude; Alone Together; Off Minor; I Apologize; A Squirrel's Tale; Vito; Vito's Dream World; Taking a Chance on Love; Tenting on the Old Campground; Puttin' On the Ritz; Death of a Cigarette; A Nightingale Sang in Berkeley Square; The Whiffenpoof Song.