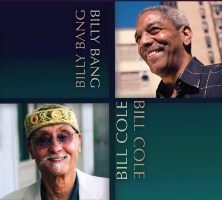 Among the more daring moments in music is one of the last adventures that violinist Billy Bang shared with double reeds player, the venerable Bill Cole. The intense encounter took place on April 17, 2009 and was captured by Cole who released it on his own label in the winter of 2010. A collection of intriguing compositions by both Cole and Bang, as well as tumultuous improvisations that emerged from the depths of each man's soul, this album will remain one of the most mystical confluences in music to be captured on record. Both men have an equal share in making this set of music noteworthy. Bang, who was at the height of his powers inhabits a world of mystery and otherworldly majesty, bows his violin with wild intensity and abandon. He traverses a musical topography that few musicians and even fewer violinists did, is articulate while creating a musical language all his own. Cole is no less exquisite performing on a collection of Asian double reeds and one mighty one from Australia. On each instrument he invents a singular improvisatory language that he and Bang write into the literature of modern music.

While the improvisations soar into the blue beyond, and swoop in and out of the depths of the soul, they have an imaginary architecture that towers as if out of a bottomless pit where their foundations lie. All of them are untitled as they should be. The first is built around the ruminations of Cole's didgeridoo. Swirling around this superstructure is Bang's violin. The master instrumentalist weaves and ducks, wails and screams as he embellishes the music that sweeps across a musical terrain that is both mysterious and wonderful. The second improvisation centers around a dialog between Cole's shyly skittering flute and Bang's violin that has seemingly come adrift on a distant planet and is making its way into a deeper realm out in space. The third improvisation features a duet between the violin and the Northern Indian shenai. Here Bang's seemingly uncontrollable wanderings are matched in equal measure by Cole's as he flies high and mighty on the shenai.

Of the compositions, "Shades of Kia Mia" by Billy Bang is sublime and a visionary excursion that seems to be a resurrection of an experience shared with an expedition in Vietnam, with its howling, wind-like bowing and conjuring up of the heat and fire of a violent breath. Billy Bang quotes majestically from "Take the A-Train" and Sun-Ra's magnum opus, "Space is the Place" in his interplanetary adventure, "Jupiter's Future." While it is the philosophical ruminations of Cole's "Poverty is the Father of Fear" that creates perhaps the most tender and thoughtful moments as the instrumentalists swagger and swerve, dance and sing as they negotiate Cole's brooding opus. The otherworldly charm of the album makes it all the more enduring.