By BRUCE LINDSAY
October 21, 2008
Sign in to view read count 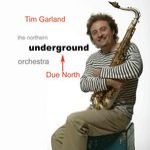 Whitley Bay is not one of the world's great centers of jazz, but saxophonist Tim Garland's move to this town in English north-east has resulted in the creation of this fine album of big band jazz and hopefully there will be more to come.

Due North is a genuine big band album, with a core of 13 players augmented by keyboard player Gwilym Simcock on four tracks and vocalist Hannah Jones on three. Garland formed his first Underground Orchestra in London in 2000. His move to Whitely Bay has enabled him to establish an Orchestra in which players from the north of England predominate, although Simcock and drummer Asaf Sirkis have worked with Garland in other London-based projects.

The Northern Underground Orchestra pay due deference to big band traditions but bring a fresh approach to the set up. The strong part played by Stuart McCallum's guitar playing, for example, lends a more modern slant to the sound. The freshness is further enhanced by the inclusion of only one standard, "God Bless the Child," and even this has a new arrangement. Garland commissioned five tracks, with financial support from the Arts Council, which are inspired by the north of England. Of these, "Toon Town" by trumpeter Richard Iles is the most immediately enjoyable and accessible, but Simcock's "Prelude," a slow and beautiful piece which begins as a duet between Simcock and Garland, rewards repeated listening.

The three standout tracks are those that feature vocalist Hannah Jones. She sings "God Bless the Child" with a strong and assertive vocal that challenges, rather than succumbs to, the idea that "them that's got shall get," and manages to make "Just for Now" compelling despite its rather weak lyrics. Her finest performance, on opener "We Got a Future Together," is reminiscent of '80s British group Working Week, building on a powerful instrumental backing to create the standout track of the album.

An original and innovative big band is a rarity in these days of small combos and economic constraints. Hopefully Garland's project can keep going as a viable performing and recording unit—this is a powerful and talented group that makes a big and enjoyable noise.

We got a future together; Toon Town; Just for Now; Tynemouth Spray; Prelude; Flag March; God Bless the Child; Red Ellen; Voyage of Discovery; Angel of the North.