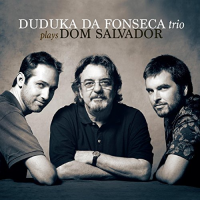 It would be something of an understatement to say that the music of pianist Dom Salvador served as a formative influence for drummer Duduka Da Fonseca. As a teenage musician, Da Fonseca absorbed every phrase and nuance that drummer Edison Machado put to wax on Salvador's immortal Rio 65 Trio (Philips, 1965). That recording, and that trio, would come to serve as a primer for the budding Da Fonseca, schooling him on samba jazz and setting him up for a future where he'd develop into one of that hybridized style's great movers and shakers.

Fifteen years after that classic album emerged, and nearly five thousand miles away in New York, a connection between these two figures was finally forged and furthered. In 1980, Salvador reached out to Da Fonseca to sub in his band. When they got together, the pianist was astonished to hear that the drummer new his music cold. Having spent enough time playing along to his classics, emulating Machado, and internalizing everything at a near-cellular level, Da Fonseca could technically claim that he'd been working with Salvador for his entire musical life, and it showed. That instant bond led to a long-term musical relationship which culminated with Da Fonseca taking the place of the late Edison Machado in a 2015 Carnegie Hall concert celebrating Rio 65 Trio's fiftieth anniversary. Now, with his own brilliant trio in play, Da Fonseca tips his hat to his idol, friend, and band mate with this trip through his catalog.

This music is an ideal fit for Da Fonseca, and that's obvious from the first. "Farjuto" finds Da Fonseca opening things up with a free rein drum solo serving as an introduction to a jaunty journey with some catchy and surprising rhythmic twists. It's a vehicle and performance indicative of the sophisticated yet approachable nature of Salvador's—and by extension, Da Fonseca's—music. The immediate follow-up—an undulating "Transition," with cadential grounding from the leader and bedrock bass from Guto Wirrti both mooring the music—has a simpler but no less arresting quality built into its rolling frame. The pairing of both tracks marks Salvador as a man of many and varied tastes; it also paints Da Fonseca as an interpreter par excellence.

As the remaining nine tracks come and go, Da Fonseca and company uncover and highlight the entire stylistic spectrum endemic to Salvador's oeuvre. The balladic "Maria," honoring Salvador's wife, presents an alluring model of beauty and emotion; "Samba Do Malandrinho" dazzles and charms with its effervescence, giving pianist David Feldman a chance to shine; "Tematrio" serves as the ultimate crossroads where blues, boogaloo, and Brazilian buoyancy meet; and "Gafieira" gives a glimpse of the tightly choreographed nature that makes Salvador's music deceptively difficult to perform. Add to that a "Para Ellis" that invites Jaques Morelenbaum's cello into the picture to pay tribute to vocalist Elis Regina and a flowing "Valsa De Esquina" and you get an even fuller picture of what Salvador stands for and how Da Fonseca does right by the music. This is truly a story of two Brazilian masters, and a page-turner at that.