By JAMES LAMPERETTA
June 19, 2004
Sign in to view read count 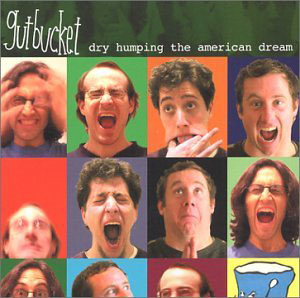 The title of Gutbucket’s second album, Dry Humping the American Dream, may well be as much a musical statement as it could be construed to be a political one, and any ambiguity regarding this interpretation would seem to be entirely what this multi-faceted, muscular, mayhem-loving quartet would hope for.

At times exuding a stadium rock vibe that could be the wet dream of any red-blooded teenage guitar-hero wannabe, song titles such as “War on Drugs,” “O.J. Bin Laden,” “Liberation,” and the title track speak to the serious side of irreverence.

Non-musical concerns notwithstanding, drummer Paul Chuffo, guitarist Ty Citerman, bassist Eric Rockwin, and saxophonist Ken Thomson once again present listeners with an everything-but-the-sink approach, creating a wall of sound and sounds that at times is drawn as much from the influence of Ornette Coleman as it is Frank Zappa.

A mastery of both bombast and subtlety, much of the charm of Dry Humping lies in the underlying sense of purpose the tunes possess. Mixing and matching bold changes in mood and texture, Gutbucket also navigates long sinewy lines and hairpin turns with aplomb, seamlessly bringing together a concoction of seemingly disparate elements not for show but for the purpose of telling their tale. Call it aural prose if you will. As a result of this they are able to differentiate themselves from the horde of chops-oriented bands who tirelessly regale us with their technical prowess but ultimately say very little to our heads or hearts as they succumb to a "look at what we can do, Ma!" approach.

Opening with the thumping, and aptly titled “Snarling Wrath of Angry Gods,” the foursome seems to be warming up. That said, they quickly hit their stride, rolling through the title track before artfully traversing ground that ranges from the “The Polka of Doom,” with its skewed melody and air of drama, to the lilting beauty of “Another World is Possible.”

As each tune yields to the next, the band’s blend of wit and whimsy couples with finely crafted tunes to create the impression of a larger tale unfolding. One of those special listening experiences that is as evocative as it is provocative, Gutbucket provides the open-minded, attentive listener with a treasure trove to process, ponder, and ultimately enjoy.

As the debate rages on about jazz being stagnant because of a stifling reverence for past glories, Gutbucket represents an important component in the genre’s future. This may not be your father’s jazz, but it is jazz nonetheless with more than enough for purists to sink their teeth into while also being imbued with the sort of modern edge that will draw in listeners from the periphery.