By JAKOB BAEKGAARD
May 4, 2015
Sign in to view read count
The meeting between drums and piano is one of the more rare combinations in jazz, but it is possible to find fine examples of this particular genre. Just think of the encounter between Italian pianist Enrico Pieranunzi and drummer Paul Motian on Flux & Change (Soul Note, 1995) and Australian pianist Mike Nock's collaboration with drummer Laurenz Pike on Kindred (FWM Records, 2012).

Pianist Denny Zeitlin and the Danish drummer Kasper Tom have added two more albums to the pile of records featuring drums and piano, but their aesthetic approach could not be more different. 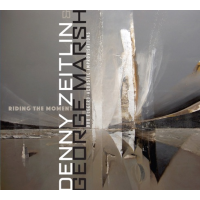 Pianist Denny Zeitlin has so far had a long and distinguished career and his catalog is consistent and worth exploring in detail. This is not least because of his explorative nature. Zeitlin has a deep musicality, but also a will to keep on searching for new sounds and expressions. He has made a soundtrack for a movie, perfected the art of the trio and from 2010-2013 he made a string of strong solo piano albums. 2014 saw Zeitlin return to the format of the trio with Stairway to the Stars (Sunnyside, 2014) that explored the vocabulary of the standards and now he is ready for some serious experimentation with an old musical friend, drummer George Marsh, on the electrified Riding the Moment (Sunnyside, 2015).

ADVERTISEMENT
Here, Zeitlin is playing in the double sense of the word. His toys are synthesizers, sound modules and computers that provide a veritable feast of sound possibilities and, as if that was not enough, he also plays the acoustic piano.

The focus is on the process of creation and not so much the finished result. It is hard to imagine that any of these tracks could become standards, but that is not the point. Instead, Zeitlin and Marsh go on a sound journey together with the volume turned up. They enter, to paraphrase one of the titles of the album, the rabbit hole together and see what happens.

Many genres are explored without limitations. There are avant-garde moments, funky grooves with synthetic horns, ambient washes of keyboard and lyrical sensitivity. Marsh drives the music forward with his drums, but he also listens when Zeitlin pauses. They listen together, they speak together through the music and it is not a silent conversation. Many things happen and one musical wave catches another while Zeitlin and Marsh continue to ride the moment. 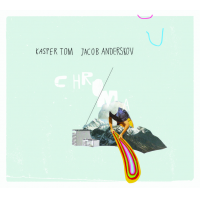 Zeitlin and Marsh play with a lot of sound from electric and acoustic piano and percussive rhythms, but drummer Kasper Tom and pianist Jacob Anderskov prefer a more meditative and coloristic approach. In fact, almost all the compositions are named after colors and it is the subtle shades of musical transformation that catch their attention. A single cymbal is touched and a quiet rustling of a drum, as a leaf falling from a tree. Soft classical chords on the piano. Lots of space, lots of emotional resonance.

On "Blå" ("Blue") the emotion and rhythm intensify and Kasper Tom plays his kit as a regular drum set that provides a rhythm for the cascade of rolling piano thunder from Anderskov, but then things slow down. There is silence. A break, as if the music needs to find itself.

Anderskov, an acclaimed pianist and composer, brings a lot to Kasper Tom's music. The chemistry between them is sparkling. Anderskov, a musical chameleon, is in his most lyrical mood and it suits him perfectly. He has also found the ideal musical partner in Kasper Tom, a lyrical drummer, who plays as much with silence as he plays with his sticks. It also has to be said that the album is recorded with great attention to detail by engineer and musician Thomas Vang.