By IAN PATTERSON
November 22, 2013
Sign in to view read count 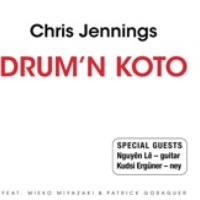 For his seventh album as leader, Paris-based bassist Chris Jennings allies himself with like-minded adventurers in koto player Mieko Miyazaki and drummer Patrick Goraguer. The common denominator between the musicians is openness to music that transcends borders and labels. Miyazaki plays in guitarist Nguyen Le's Saiyaki along with tabla player Prabhu Edouard; Goraguer—a regular in Jennings quartet—has played with bassist Richard Bona and singer Fema Kuti, while Jennings's collaborations include oud player Dhafer Yousef and saxophonist Lee Konitz. The idiom that the three converse in is, perhaps unsurprisingly, a hybrid of jazz and roots music, though their rich vocabulary and flexible grammar is as unique as it is captivating.

Chamber intimacy, rootsy rhythms and improvised passages interweave on "Left Turn Signal," which revolves around an infectious koto ostinato and drum and bass groove. Jenning's affinity with Algerian gnawa music imbues the upbeat "Teylà Ferechteh," which is preceded by an extended bass intro. Goraguer and Jenning's dancing rhythms create a platform for Miyazaki, who steers a course between melodic lead and free improvisation. The delightfully loping groove and pretty koto melody of "Fifth Face" concedes space for bass, koto and guitar solos; Jenning's unhurried lyricism, Miyazaki's harp-like glissandos and bent notes, and Le's sinewy jazz-rock are portraits in contrast but their brevity ensures the tune is not hijacked.

A tanpura drone and Kudsi Ergüner's Turkish ney flute combine on the haunting introduction to "Silent Speech"; toms and bass inject steady rhythm while Le's brooding solo is subtly accompanied by Miyazaki and Goraguer on santour. Spoken Farsi introduces "Tehran"; ney and santour combine on one of the most overtly folkloric tunes of the set, while Koto and bass bring harmonic and textural depth. The lightly stepping trio number "You Are Missed" features Miyazaki's on wordless vocals and blurs the lines between traditional and contemporary and between East and West.

There's a baroque somberness about the koto and bass intro to "Vanton," though this gives way to a more abstract passage where all three musicians improvise collectively. Jenning's solo bass provides a gently singing interlude before the trio returns to the more somber terrain of before.

Jennings's compositions are built upon experimentation that is closely tied to a deep respect for tradition. His spirit of adventure—with Miyazaki and Gorageur equal partners in the journey—embraces the essence of folk music but looks to tell new stories. There's a timeless beauty in these tunes and a contemporary sense of flare in the trio interplay. This is neither jazz nor World Music, though it has elements of both. It's simply music without borders, and pretty hypnotic music at that.