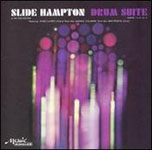 For Drum Suite, Slide Hampton set out to make an album to feature the drumming of Max Roach, but he accomplished much more: a display of why teamwork is at the essence of powerful jazz. Besides the framing of Roach's melodic and multi-dynamic drumming, the album succeeds in featuring the entire ensemble as part of a singular musical statement.

Yes, Roach, George Coleman, Yusef Lateef, Freddie Hubbard and Hampton himself all turn in great solos, but more than that, each moment on this recording flows to the next seemingly effortlessly: from revolutionary sounds ("Fump starts with a Middle Eastern-sounding flute/drum duo and winds up in 5/4 and "Drum Suite is filled with unique chord voicings and angular forms) to more traditional tendencies ("Like Someone in Love or "Stella by Starlight ), this disc has it all: great playing, great writing, varied moods, tempos, dynamics and orchestrations.

Listeners who have enjoyed Yusef Lateef as a musical explorer can go immediately to "Like Someone in Love and hear him playing a ballad as skillfully and beautifully as Coleman Hawkins, Dexter Gordon or any of the other great masters of the tenor saxophone. Then let the recording go on to "Gallery Groove, where a fast tempo "tenor battle" ensues between Lateef and Coleman (with Roach pouring gasoline on the fire and Hampton's writing framing the picture perfectly).

"Drum Suite (Parts l-V) is the centerpiece of this recording, of course, and while it might be obvious to choose fast tempos to display Roach's ferocious and virtuosic side, the more meditative parts of the suite feature a drummer whose sense of melody has never been equaled. This recording ends with a hip, upbeat version of Leroy Anderson's "Sleigh Ride —just in time for the winter season.

Fump; Lover; Like Someone in Love; Gallery Groove; Our Waltz; It